In this recipe for slow cooker apple crumble, the apple filling cooks at the same time as the crumble oatmeal topping for the ultimate warm dessert to go with a family meal. It’s a one-pot recipe with the added convenience of getting the food prep out of the way earlier on. 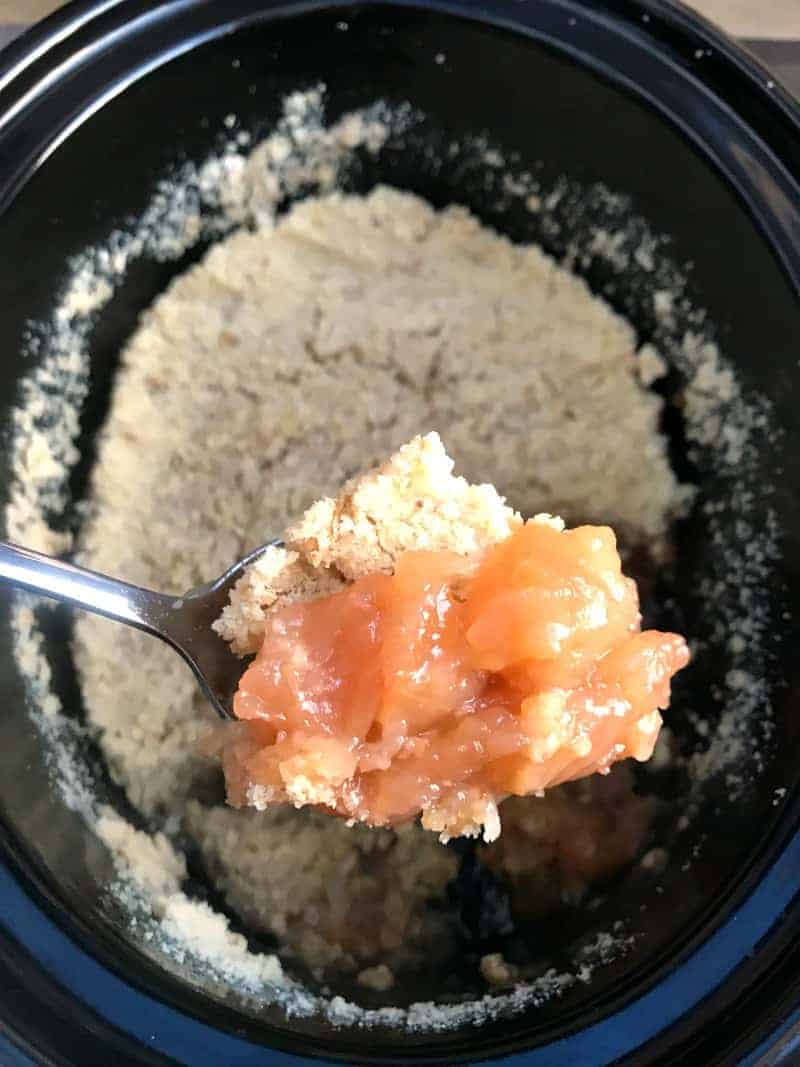 A crumble is of course a well-loved dessert enjoyed in the UK to follow the good old Sunday roast, or in fact any day for a bit of comfort food! Cooking apples are sliced up and baked in a dish at the same time as the crumble topping.

Apple crumble is very similar to apple crisp which is a dessert from the USA. Traditionally crumbles don’t contain oats, but I actually like to add in oats in my crumbles to give the topping a bit more texture than just flour, butter and sugar. 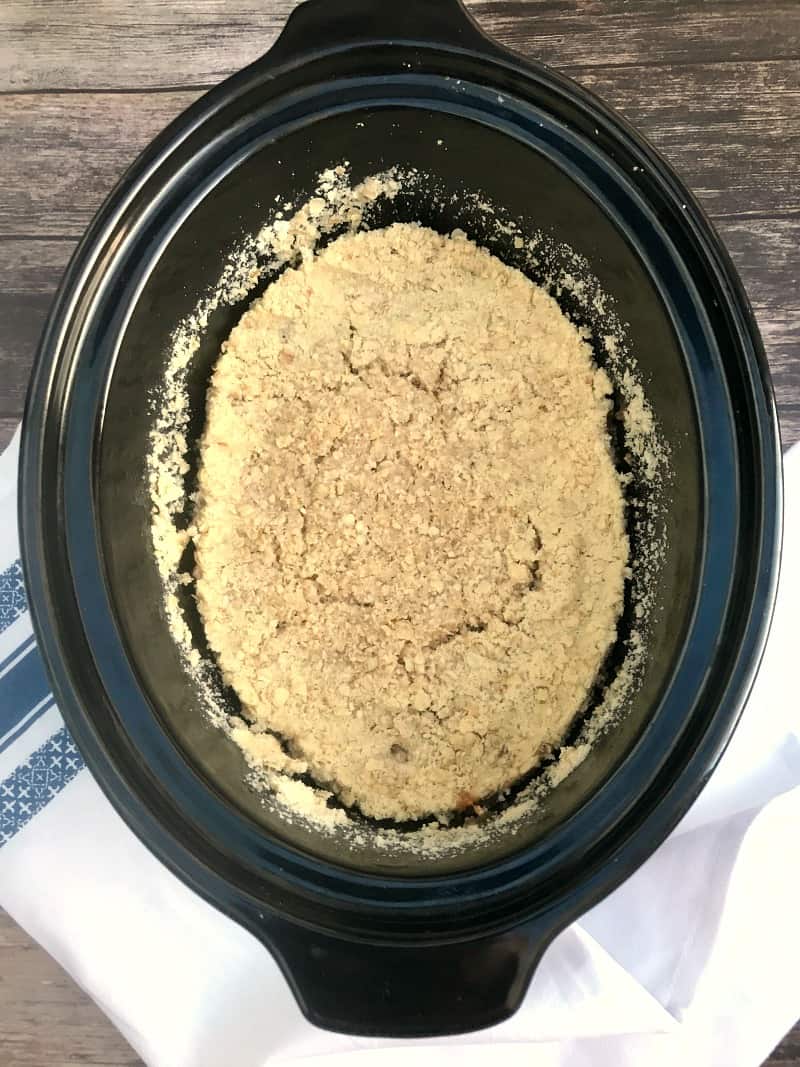 For me the convenience of making desserts in my slow cooker is that same key factor which makes me use my crockpots for main meals – convenience! 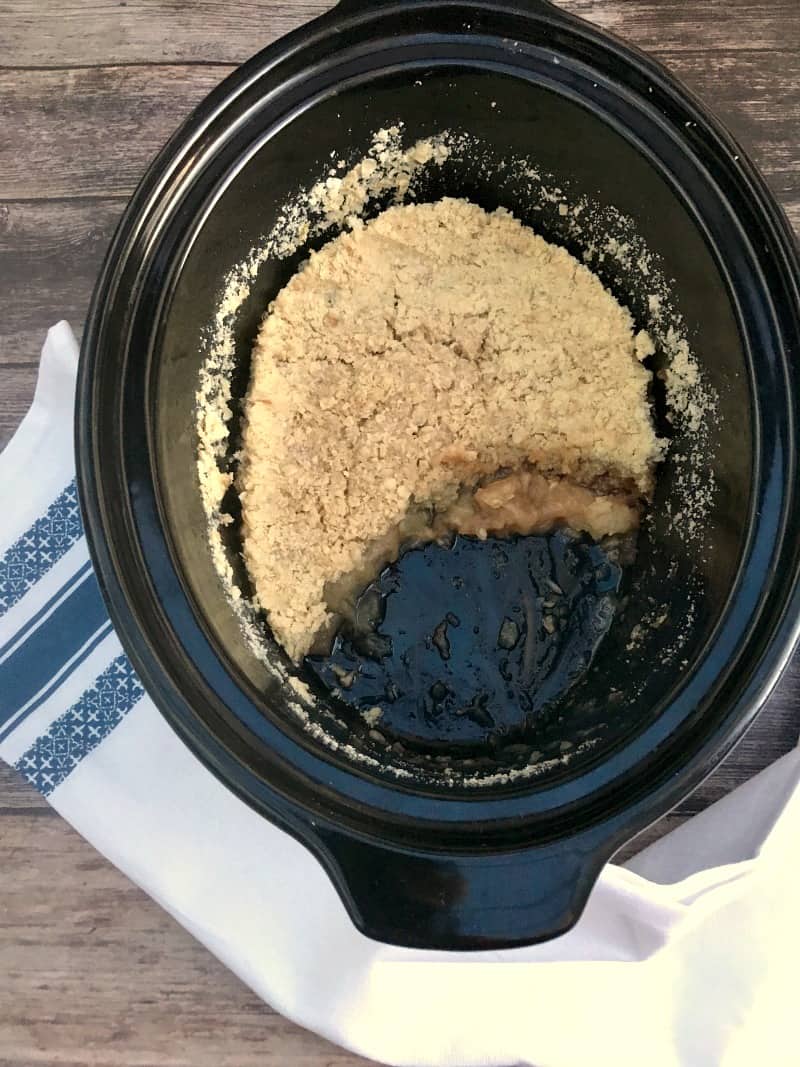 Taking the food preparation and doing it earlier, then leaving your dish bubbling away in the crockpot, while you can then do something else, means there is no mad rush to get the food cooked when everyone is hungry and I’ve just finished work.

Make sure you check out my slow cooker archives for loads of slow cooker recipes from main dishes, bread, desserts, fudge, one-pot dishes to the most indulgent chocolate bakes!

I also have an extensive guide to all the different bakes and desserts you can make in a slow cooker, some of which might surprise you!

When you make a crumble in the slow cooker you still get that delicious topping with crispy edges, and the apples cook wonderfully underneath the crumble streusel top layer. 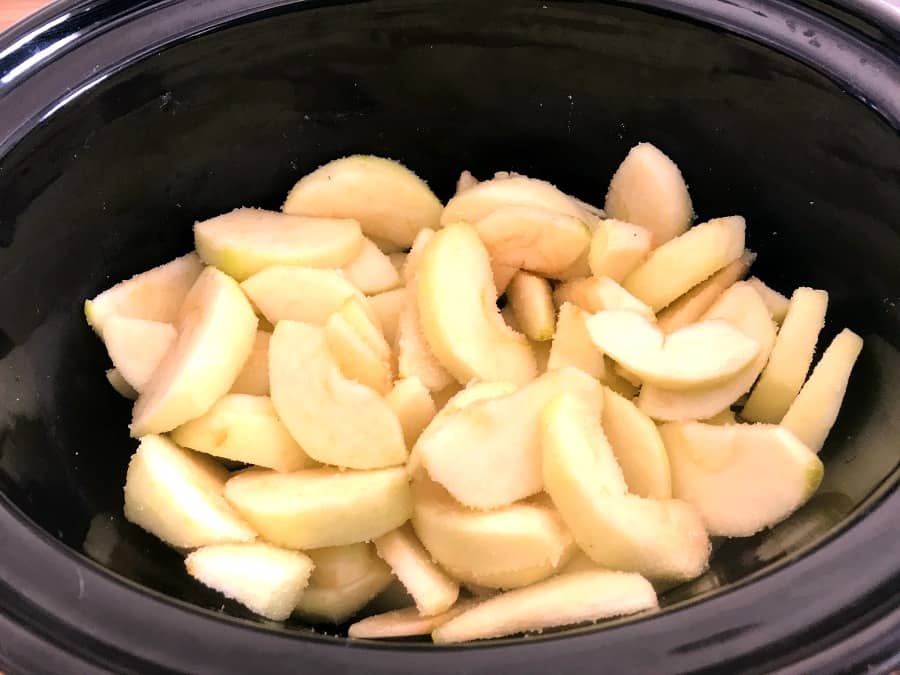 2. In a large bowl, prepare your crumble topping. Sift the flour into the bowl, then cut the butter into cubes and rub it into the flour. You can use butter straight from the fridge when making crumble, you don’t need to bring it to room temperature like when you are making a cake. Rub in until the mixture has the texture of medium (not fine) breadcrumbs.

Stir in the sugar and oats. 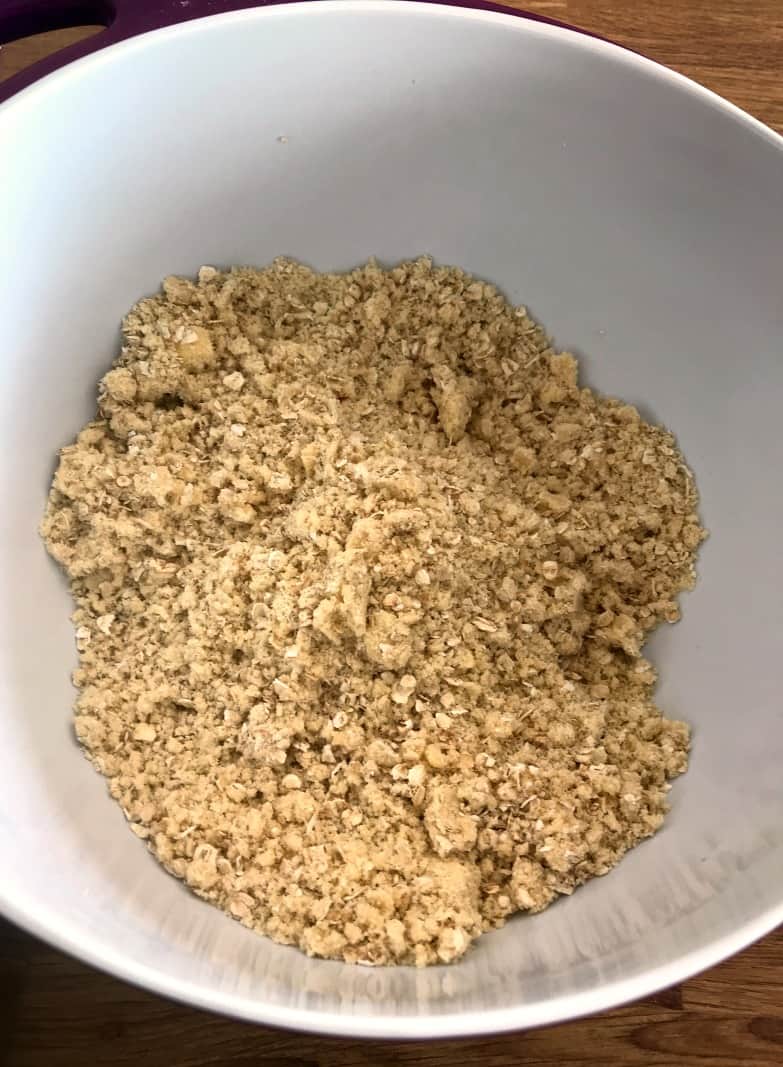 3. Pour the crumble topping over the fruit, and even it so it is flat and evenly distributed in the pot, press down lightly. 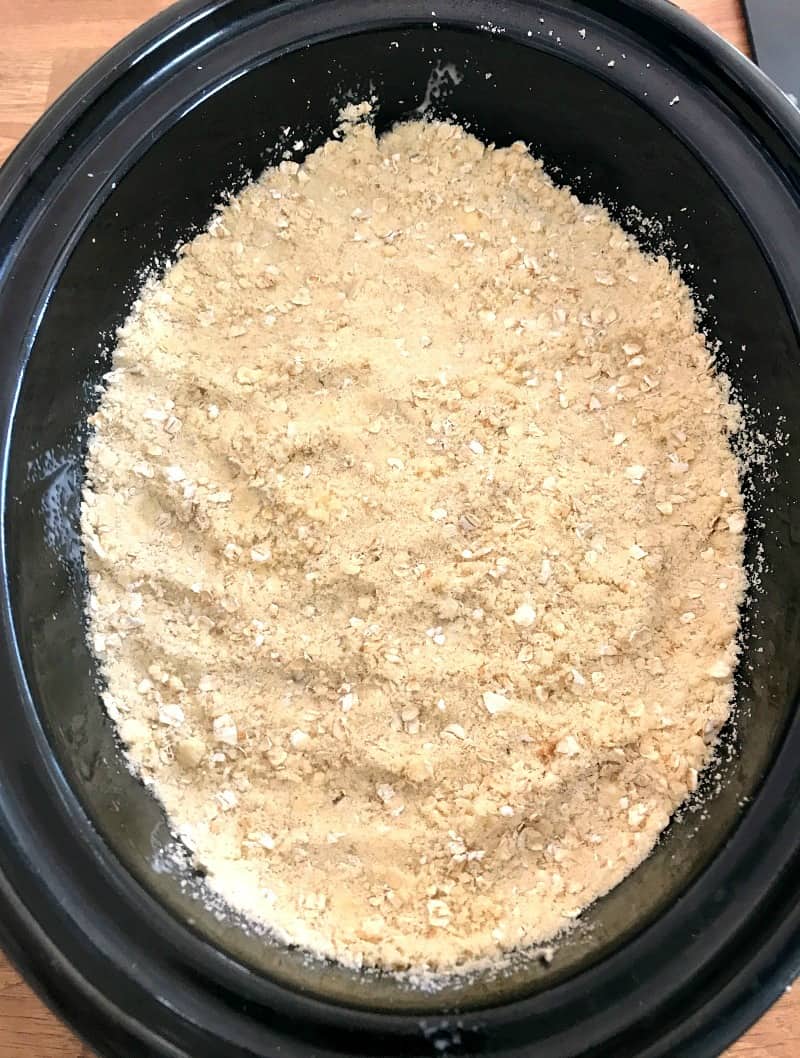 4. Turn on the slow cooker. Take a clean dish towel and place it under the slow cooker lid, folding up the sides so they do not drape over the metal edges of the slow cooker, but instead up over the lid. Put the lid on and cook on high, set the timer to 2.5 hours.

5. Once the 2.5 hours has passed, take the lid off, turn it at a right angle so the steam can escape, and cook for another 30 minutes on high. This helps the crumble topping to crisp up. 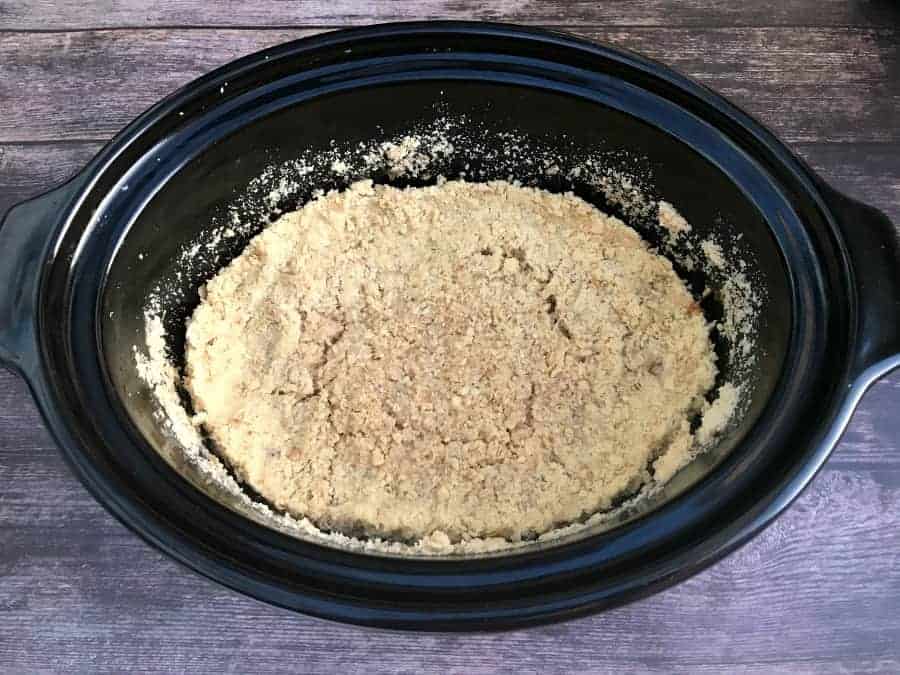 6. Serve, with custard if desired. 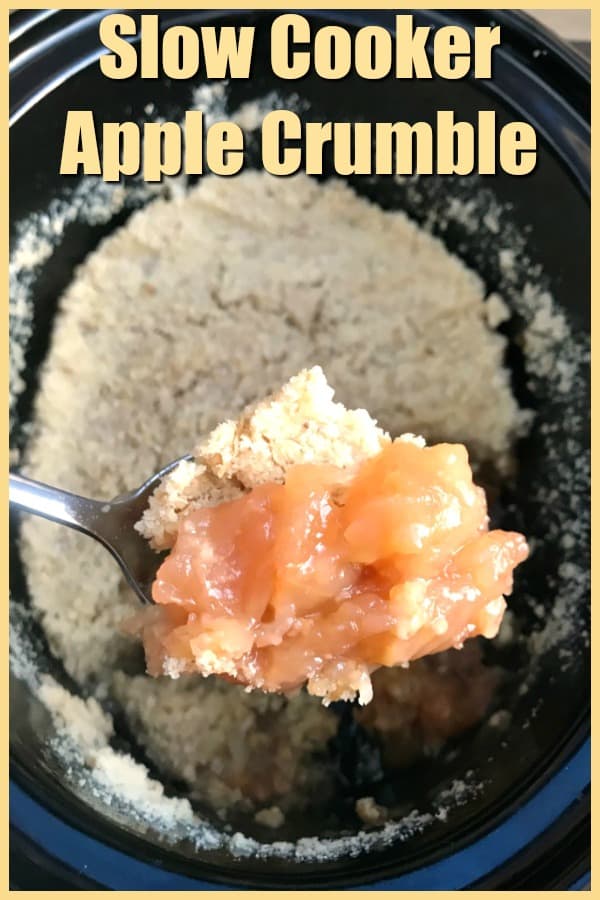 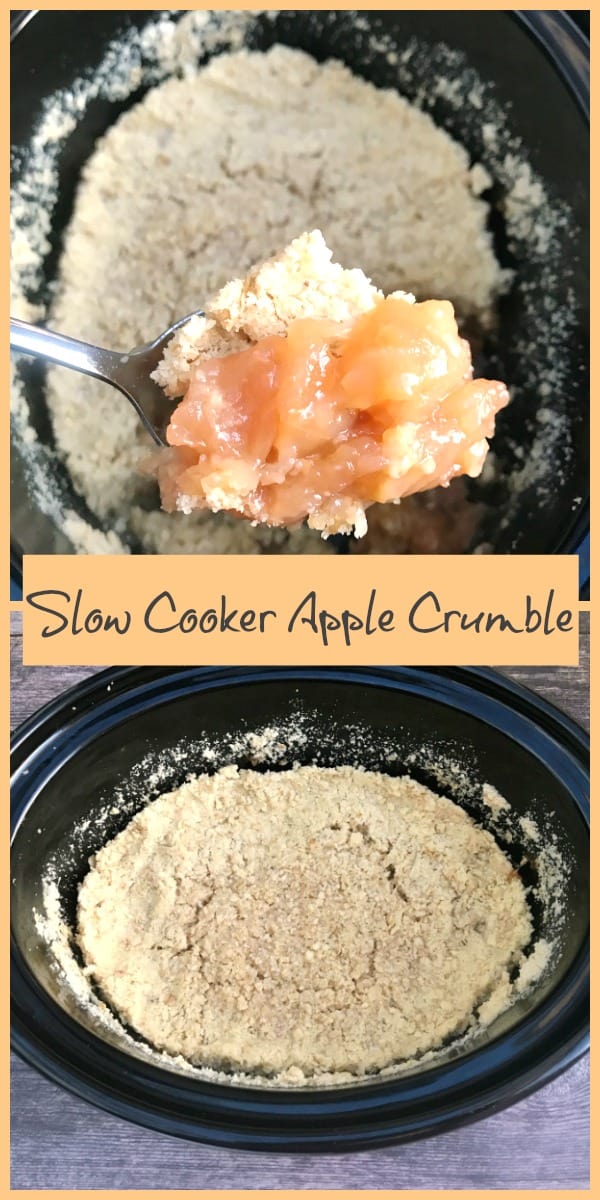 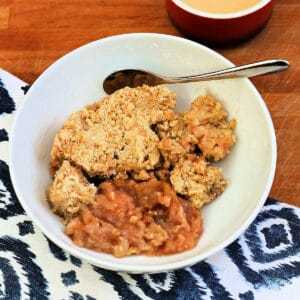 For the crumble topping:

For the fruit filling:

Did you try and love this recipe?Then please leave a review and rating in the comments at the bottom of the post. If you post your creation on Instagram, tag me @bakingqueen74 or use hashtag #bakingqueen74!
« Feta and Pepper Savoury Muffins
Slow Cooker Chicken Ratatouille »