My cherry Charlotte Russe has delicious layers of cherry jelly, vanilla bavarois and genoise sponge with the classic ladyfingers around the side. I’ve topped it with piped whipped cream and chopped cherries for an amazing dessert showstopper! 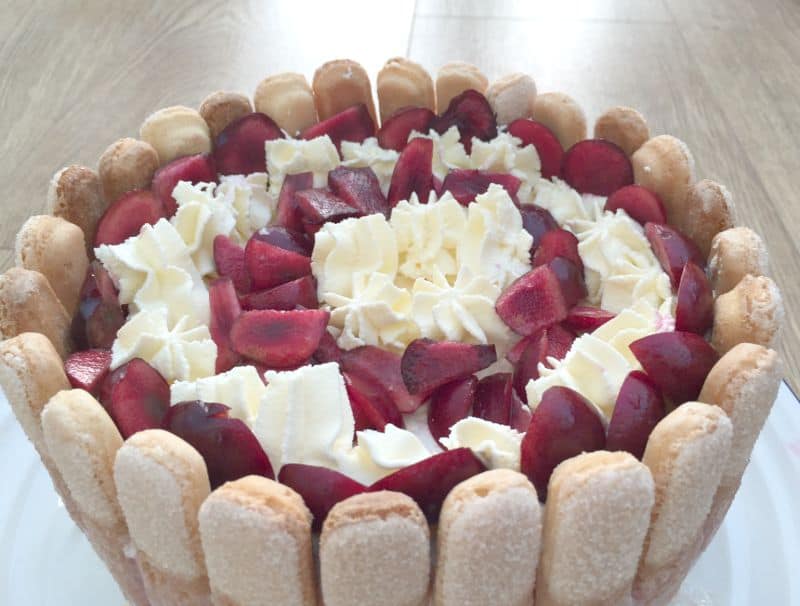 I would not normally attempt such a complicated recipe but since they made Charlotte russe on GBBO last week I decided to give it a try.

Having seen the way it was assembled, and that clear defined layers of bavarois and jelly were the aim, it looked like a fun recipe to make.

I looked into the history of this dessert, and found it was invented by a French chef named Marie-Antoine Carême, who named it in honour of his former employer George IV’s daughter, Princess Charlotte, and his employer at the time Czar Alexander I (“russe” as he was Russian).

It always consists of a crème bavaroise set in a mould of ladyfingers or sponge biscuits. I am therefore also entering this recipe into my Perfecting Patisserie challenge for September. 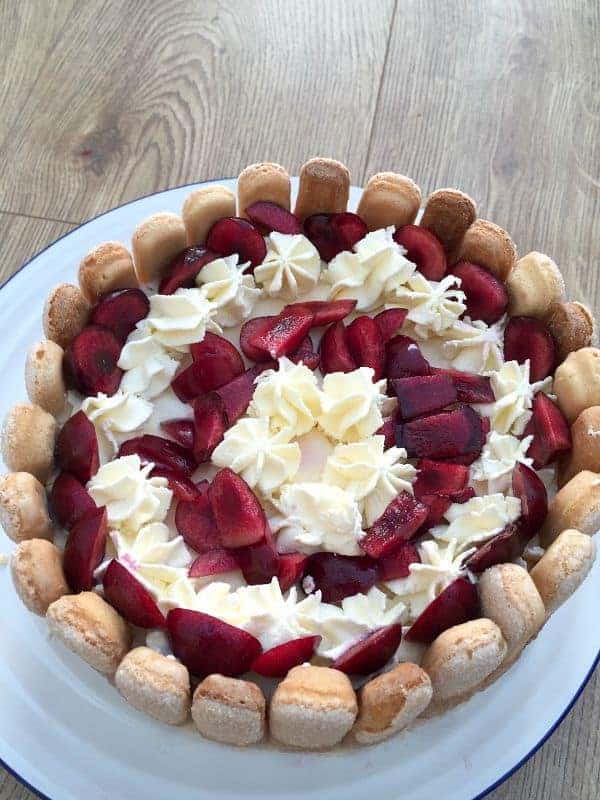 Having now tried this out, I really am not sure how the GBBO bakers managed to make their Charlotte russe in such a short amount of time. Mine took all day, with the genoise sponge for the base baked first thing in the morning, then a vanilla bavarois before lunch, black cherry jelly added a couple of hours later and then decorating several hours later once fully set.

And I used shop-bought sponge fingers and jelly as quick shortcuts! So this would be a full day task if you were making everything from scratch I think (unless you are able to devote yourself to it all day and do nothing else, so no school runs etc unlike me).

Having never had bavarois  before, I wasn’t really sure of the texture to expect, and the recipe I was roughly following for the steps (Nadiya’s recipe on BBC food) didn’t really indicate how long would be needed for setting the layers.

My bavarois and jelly mixture then took an age to set, about four hours in the fridge. I don’t have any room in my freezer so it couldn’t go in there. I would recommend using a freezer for setting if you have room though, it might not take so long then!

When I removed the dessert from the cake tin mould, I could see the bavarois had seeped through the edge of the sponge biscuits. However, it did finally set and I am pleased to say it stayed in one piece as I removed it  by pulling on the clingfilm! Moved to a plate I could decorate with cream and cherries. 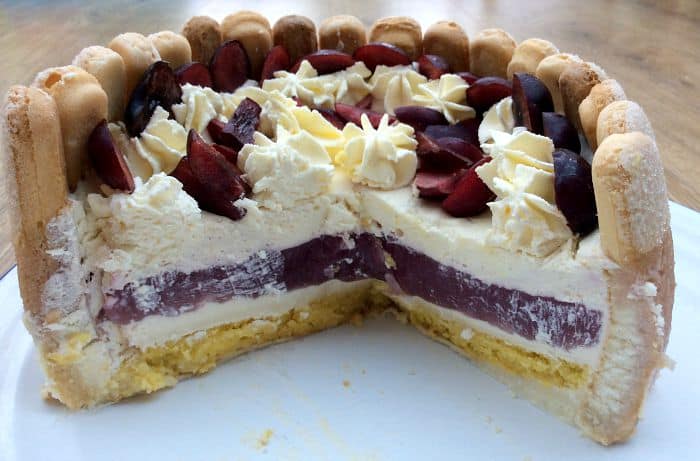 Very pleased with my layers in the end! The jelly sank below the top of the bavarois but formed a clear layer in the centre. 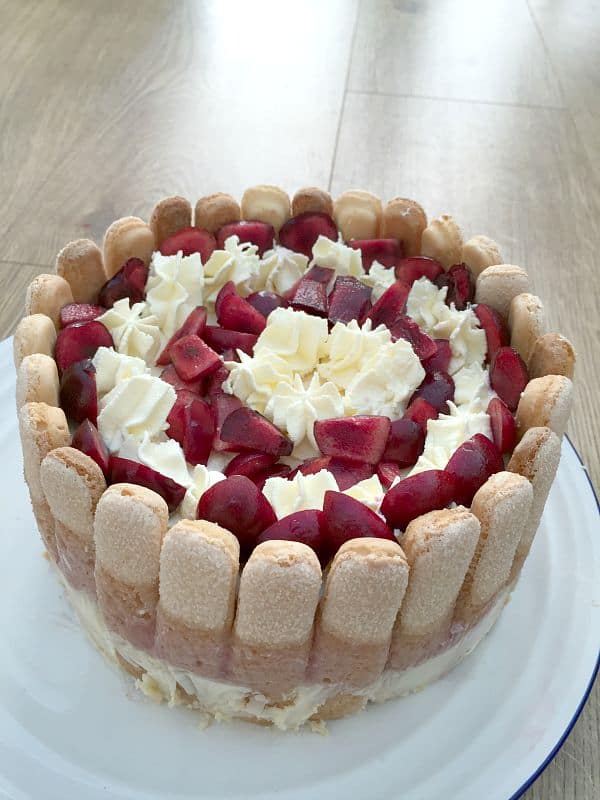 For more charlotte ideas, have a look at these:

I am linking up with the Great Bloggers Bakeoff 2015 from Jenny from Mummy Mishaps, this week hosted by Debbie from An Organised Mess.

Also linking up with my Perfecting Patisserie challenge.

Pin my cherry and vanilla charlotte russe for later 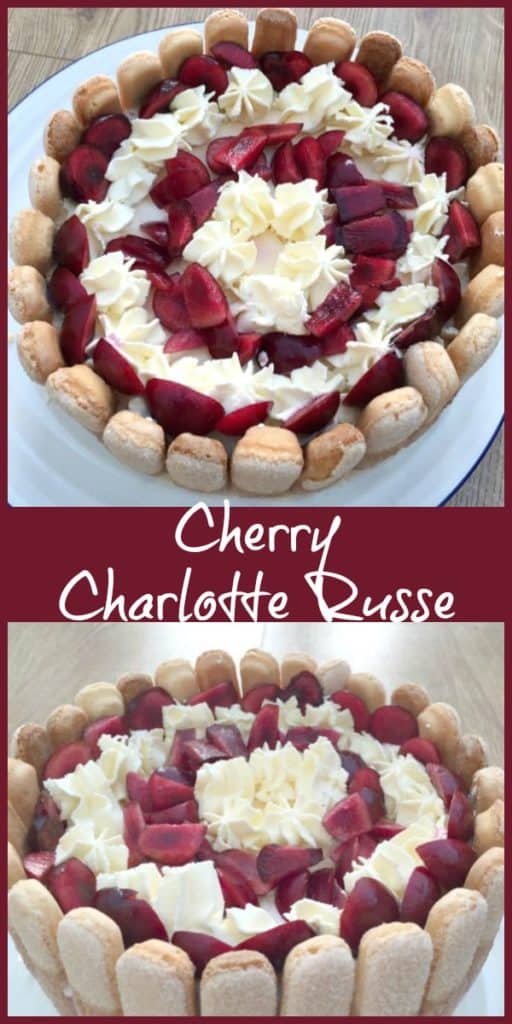 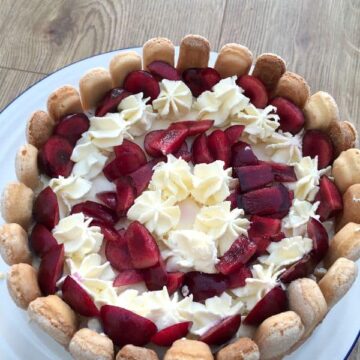 For the genoise sponge:

For the vanilla  bavarois:

Did you try and love this recipe?Then please leave a review and rating in the comments at the bottom of the post. If you post your creation on Instagram, tag me @bakingqueen74 or use hashtag #bakingqueen74!
« Waitrose Organic September Challenge
Marshmallow Fluff Chocolatines (Mokatines) »