Delicious for breakfast, this six-strand challah braid is a two-tone bread with part chocolate dough, simply divine and fun to make! 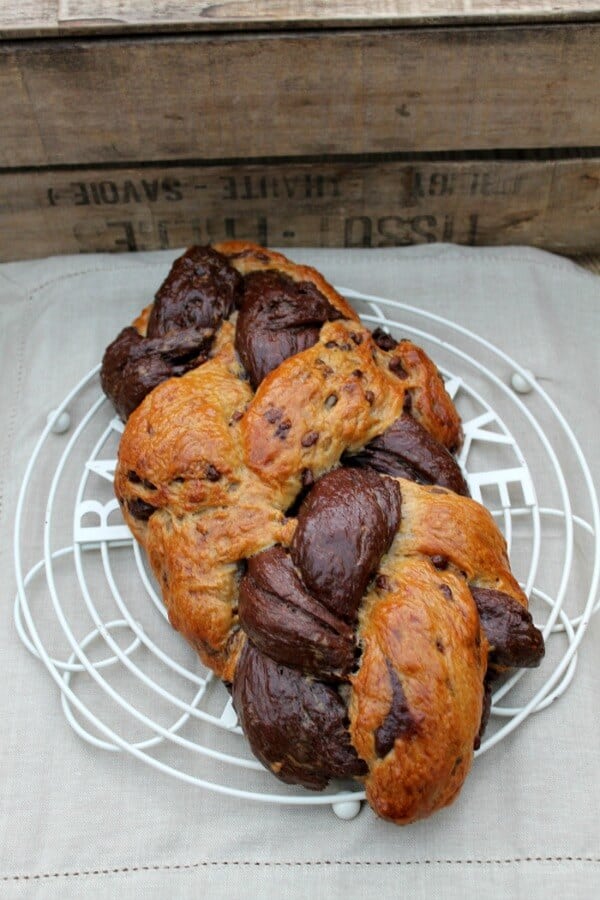 If you haven’t noticed, I’m baking along with the themes of the Great British Bake Off each week. Not all the bakes of course, who has time for that? But each week I try to bake something inspired by the previous week’s show.

This week was Bread Week, and the bakers had to make a Signature bake of a chocolate loaf, then Dampfnudeln in the Technical (a kind of sweet steamed bun or dumpling, originating in Germany) and finally a savoury plaited loaf for the Showstopper. My bake this week is a chocolate six-strand challah braid.

I’ve seen delicious looking challah made by Helen from Family Friends Food, among others, and wanted to make it for quite a while, so I decided this would be the time to do it.

I also came across a recipe by The Nosher for double chocolate chip challah and I loved the different colours of the dough and the multiple-stranded braid so wanted to include these elements in my bake as well.

As many challah recipes are in cup measurements and I didn’t want to use these, I referred to several different recipes for challah and used elements of each, including Helen’s spiced apple challah, to make my own challah inspired recipe for the bread.

Gladly it worked well and the resulting loaf is deliciously springy and full of the flavour of the cinnamon, honey and chocolate. As I didn’t try to incorporate any really heavy elements like chocolate spread into my loaf, it cooked through with problem (many of this week’s bakers seemed to have a problem with this due to all the chocolate in their bakes). 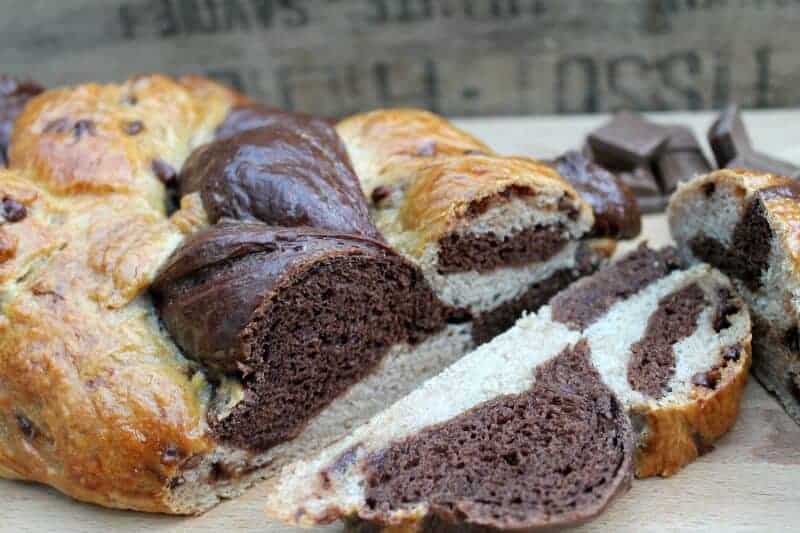 Inside, the different coloured strands have made a two-tone loaf, and the chocolate chips have melted into the bread in places after baking giving a really unctuous flavour.

The slices look effective with their stripes of colour, and each slice is different due to the braiding. I love the dark colour that the dough with added cocoa has, and the bread really shines from the egg wash you apply before baking. 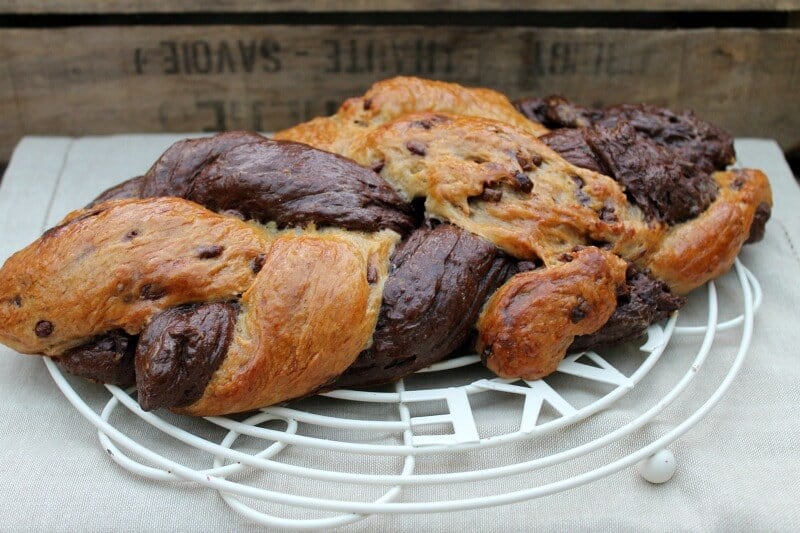 My braid isn’t that tidy, some parts of it broke apart during the second rise.

I think on the Bake Off show Paul Hollywood mentioned it is best to only give a short rise time for the second rise when working with plaited bread, to avoid losing shape, but as I had to go to the supermarket while mine was proving there was little chance of that! 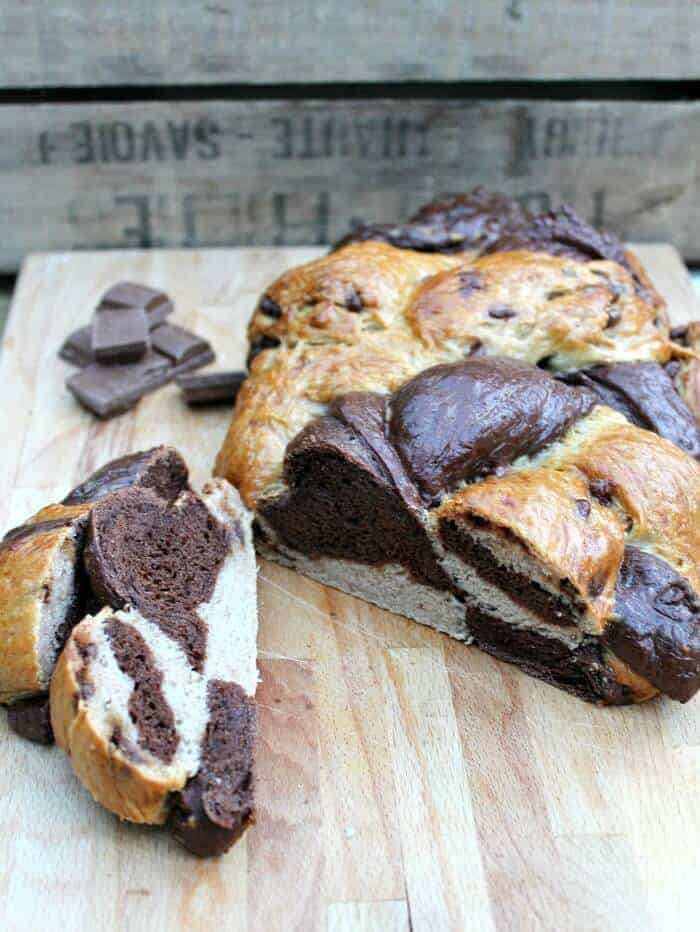 I found the six-strand braid quite hard to do and will definitely be practising it again in the future. I’ll be sure to add a step by step for the braids when I make this next.

You can check this helpful video on Youtube which takes you through the process.

I do plait both my daughters’ hair every day so I have a lot of plaiting experience, but luckily I just do normal plaits! 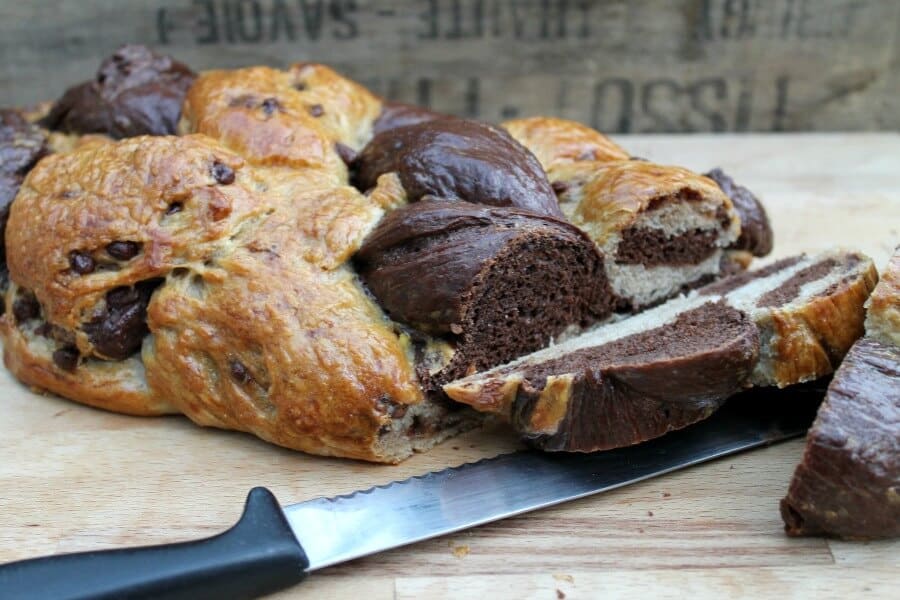 Pin this Chocolate Challah Braid recipe for later on Pinterest: 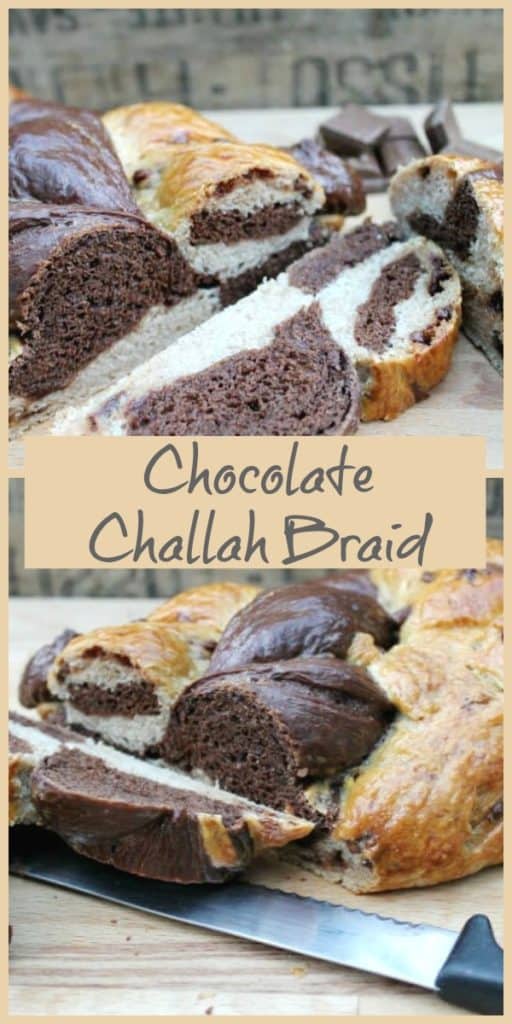 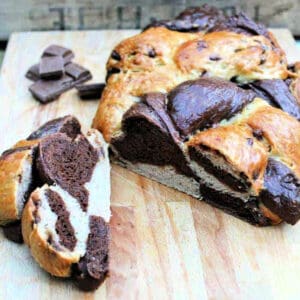 Sending this over to the Great Bloggers Bake Off with Jenny.

Also joining in with We Should Cocoa with Choclette