Slow cooker mac and cheese or macaroni cheese is the perfect dish to set it and forget it, this from-scratch recipe made the authentic way with a roux-based sauce tastes amazing and the whole family will love it. If you want an easy and delicious recipe this will be perfect for you. 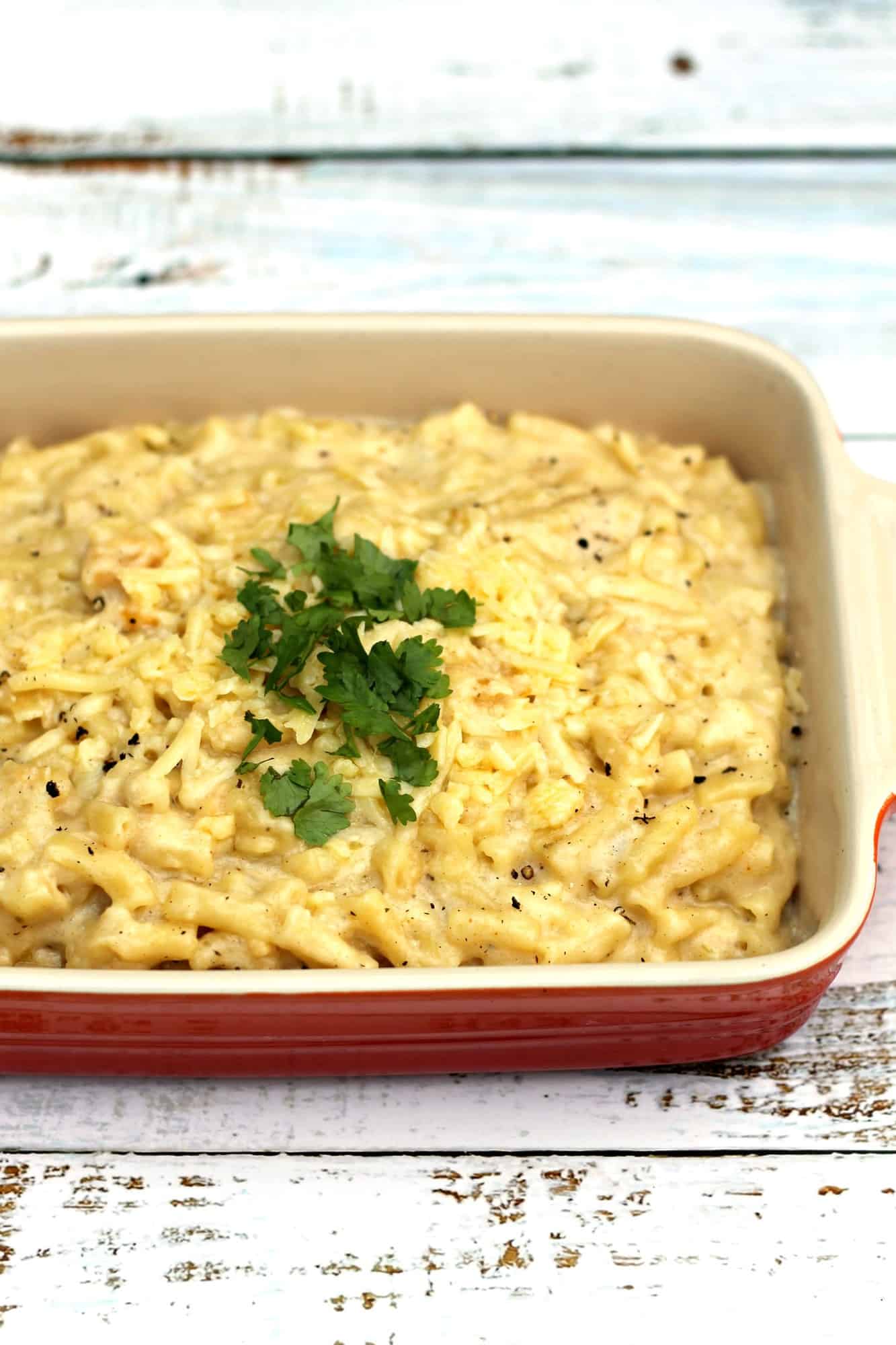 Odd as it might seem but other than lasagne I have never cooked pasta in the slow cooker before, after lots of horror stories about it turning very starchy or going mushy.

I wanted to make mac and cheese as a side dish to go with our roast dinner but wanted to prepare it earlier in the day to save time later. That’s when the slow cooker comes to the rescue!

Now since I tend to avoid using convenience ingredients and make my recipes from scratch, I needed to try something different. A quick look on the Internet showed many US recipes for slow cooker mac and cheese which use either evaporated milk or cream cheese instead of a real cheese sauce.

I didn’t want to go down this route as I wanted to keep as much flavour in my macaroni cheese as possible! So I have gone for making a really thick white sauce as the basis for my cheese sauce, then adding cheese and cook this in the slow cooker.

The thickness of the cheese sauce I think is the key to ensure the sauce doesn’t split or curdle as it cooks away gently in the slow cooker. 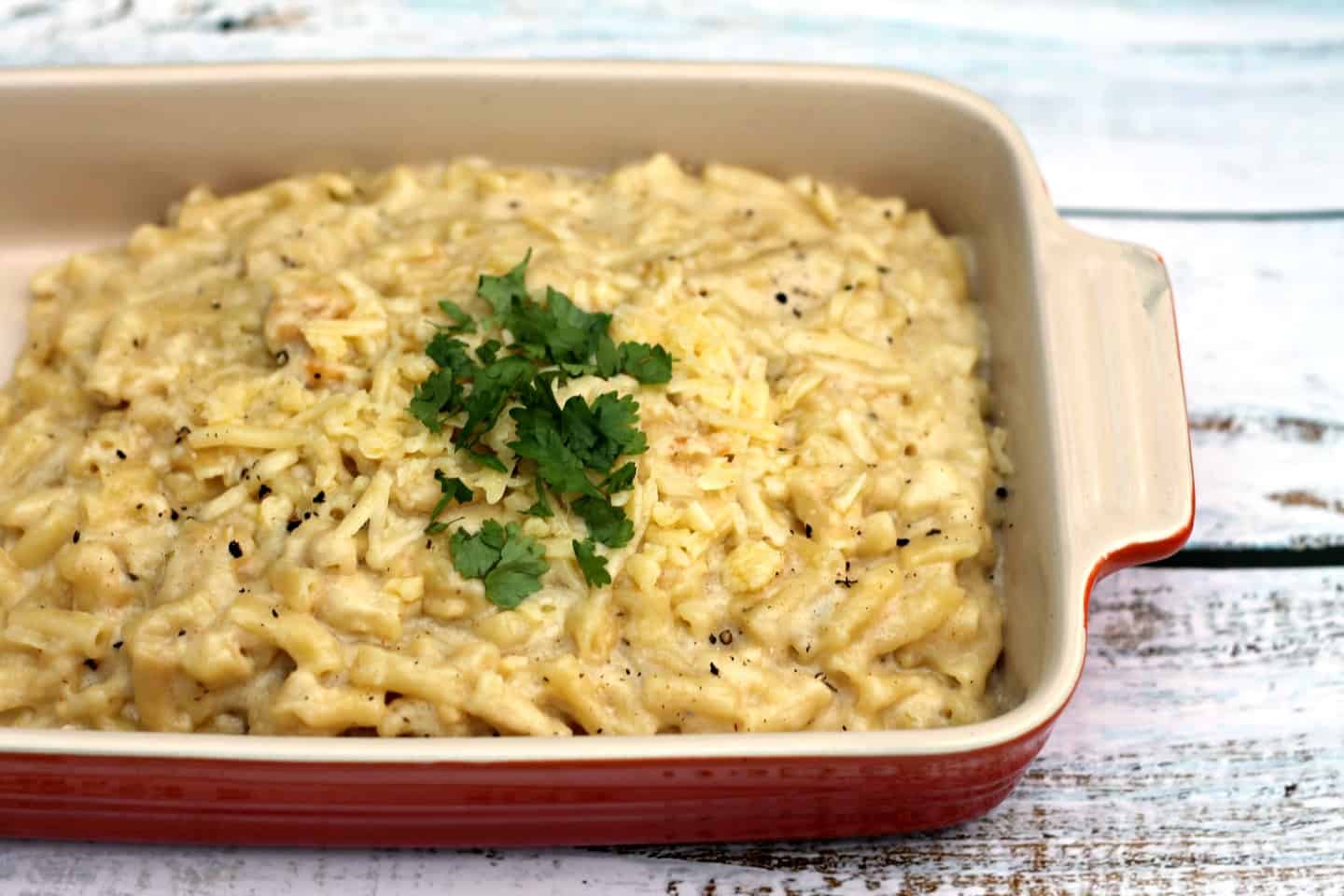 For the amounts please refer to the recipe card at the end of the post.

Put the macaroni and grated cheese in the slow cooker pot. 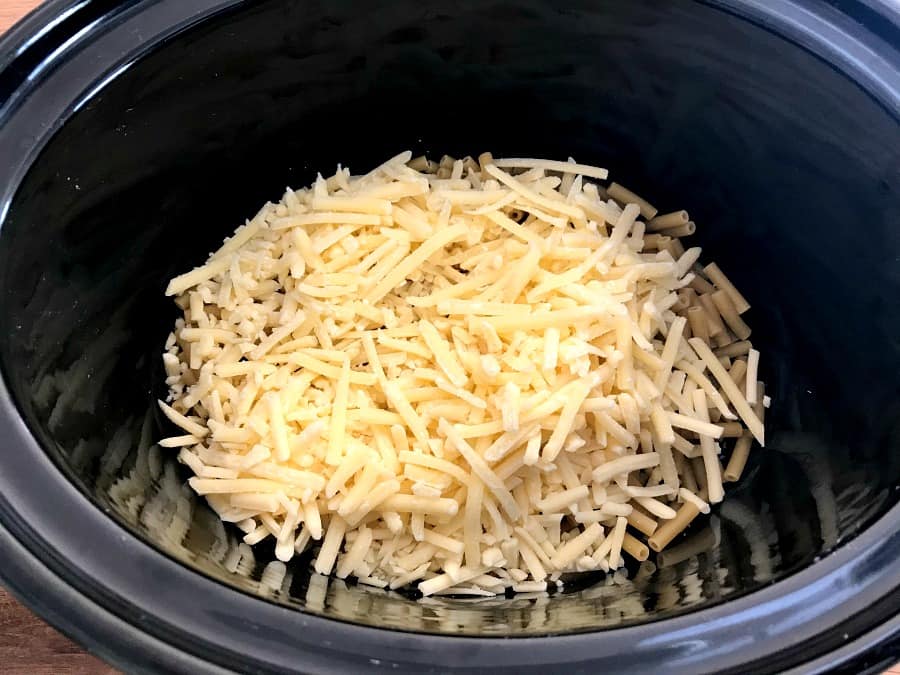 Now make a thick white sauce in a pan on the hob using the butter, plain flour and milk. To do this, melt the butter, then stir in the plain flour. Cook for 1-2 minutes.

Whisk in about one fifth of the milk, it will thicken up after about 30 seconds. Whisk in another fifth and allow to thicken. Repeat until all the milk has been added, then cook for about 5 minutes on a low heat until the sauce thickens. You are looking for a very thick sauce.

Whisk the white sauce well, season with salt and pepper then add it to the slow cooker with the water to the pasta and cheese in your slow cooker pot.

Now mix well with the cheese, water and pasta so it is well combined. The next step is to add flavour with a little minced garlic, parsley and mixed herbs, and a little paprika. All of these, along with seasoning, give a little lift to the flavour of the cheese sauce.

I also like the speckles of green that the parsley adds! Once all mixed, leave it to cook. By making the sauce extra thick (by using more of the flour and butter than you would for a thinner sauce) and then adding water in with the pasta, the pasta will cook and absorb the water, leaving the sauce really thick and delicious.

This is a similar idea as for the pasta bake sauces in a jar which you add water to and then pour over pasta, but in a recipe from scratch. 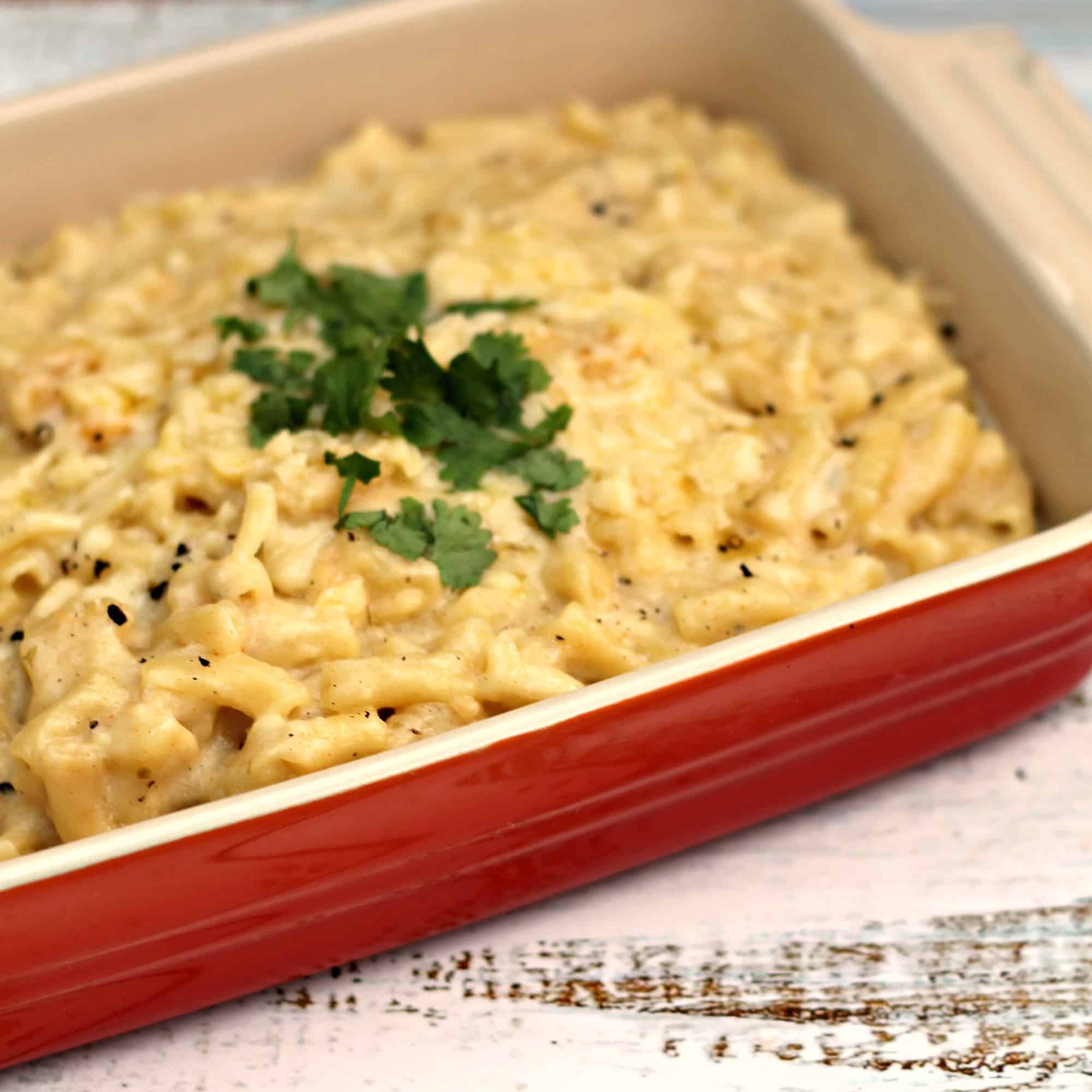 I was so pleased to discover after only 1 hour and 45 minutes on low, the pasta was deliciously soft, the cheese sauce had not split or curdled or gone watery, and my thick sauce was lovely and thick!

The family had no idea this mac and cheese had been made in the slow cooker rather than in the oven.

Slow cooker mac and cheese will certainly be going on my meal plan more often now, since it is so easy and convenient to make. Full of cheesy carby goodness!

So next time you want to make slow cooker mac and cheese, and need a UK recipe with metric measurements and not using unusual ingredients, make sure you try my from scratch recipe.

It works great as a side to our roast chicken dinner, with roasted vegetables and salad.

Other dishes you could serve macaroni cheese with include:

To make this a meal in one you could also add peas, sweetcorn, diced ham, bacon lardons, or even chunks of cooked chorizo. 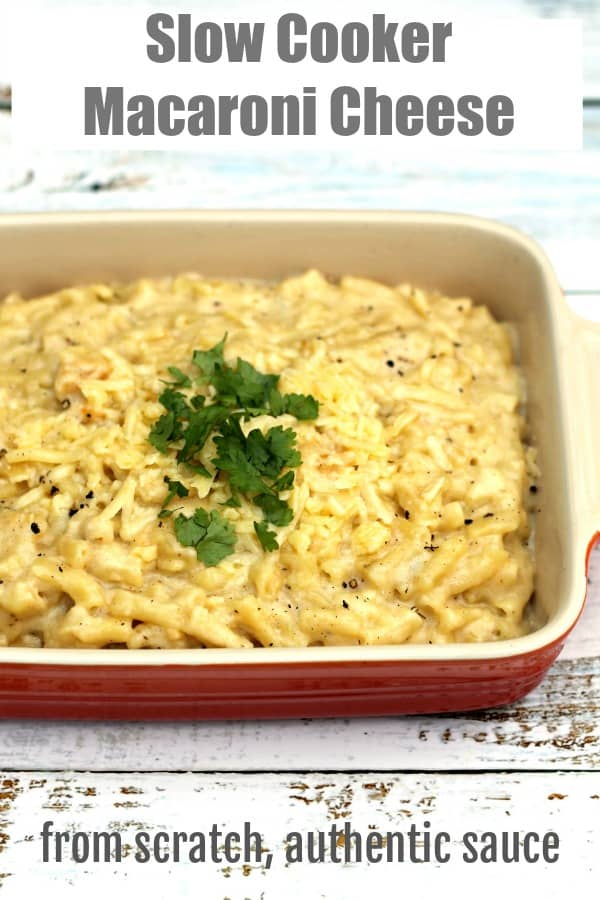 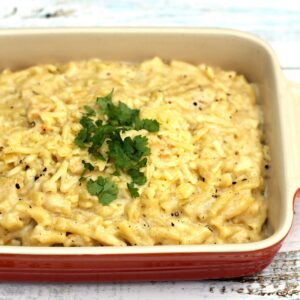 For the white sauce:

For the mac and cheese:

To make the sauce:

To make the mac and cheese:

Slow cooker size I made this in an oval 3.5 litre slow cooker.
Did you try and love this recipe?Then please leave a review and rating in the comments at the bottom of the post. If you post your creation on Instagram, tag me @bakingqueen74 or use hashtag #bakingqueen74!
« Slow Cooker Red Velvet Cake
Slow Cooker Pulled Beef with Harissa »