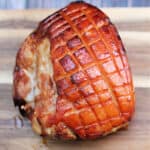 Great for your Christmas or New Year table, and also perfect for a Sunday roast all year round, slow cooker gammon glazed with maple syrup is so easy to make and bound to be a hit with your family. 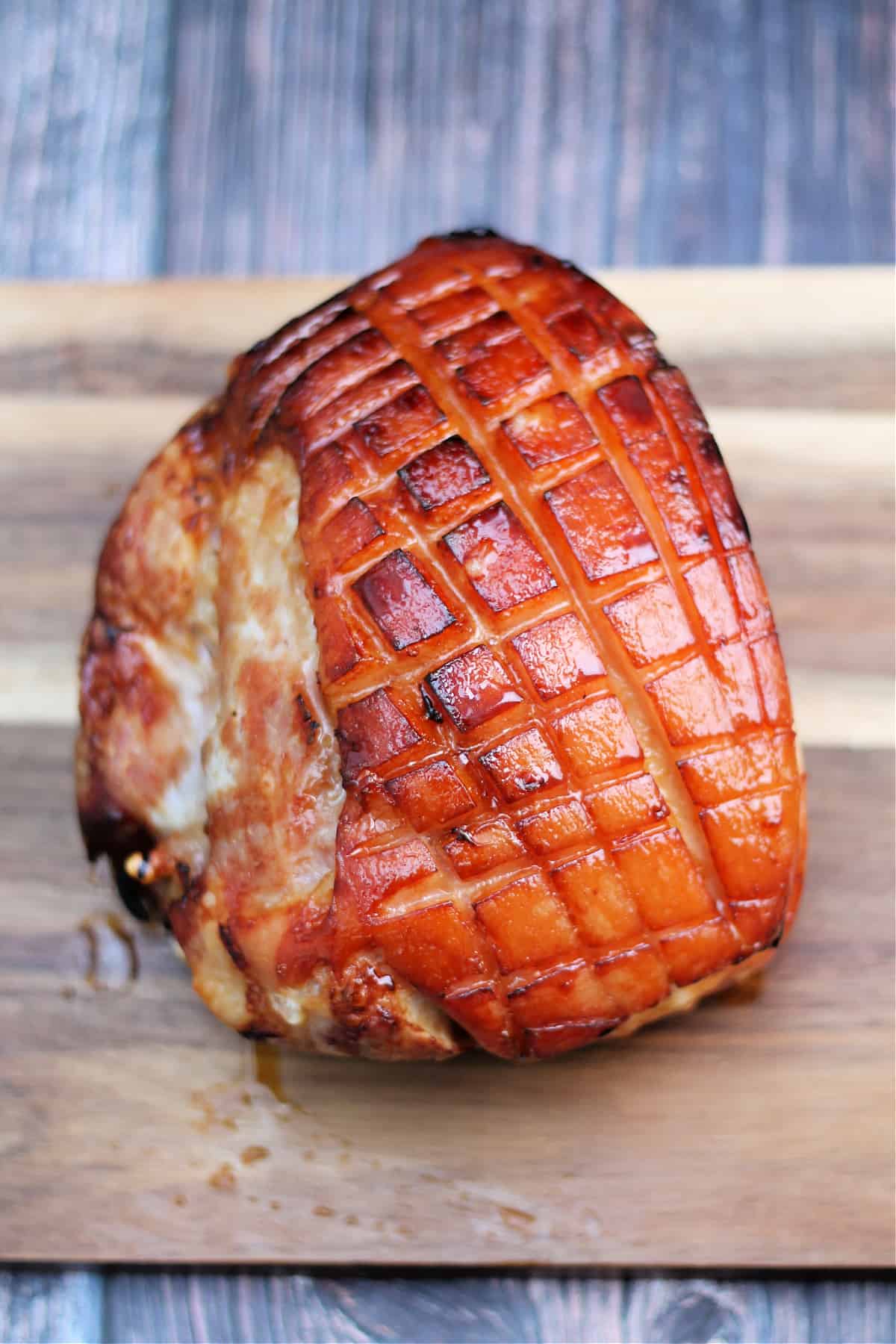 The maple syrup makes the gammon or ham just taste sublime, with that sweet but mellow flavour.

This gammon is cooked in apple juice then glazed with maple syrup and roasted briefly in the oven to give this marvellous result. 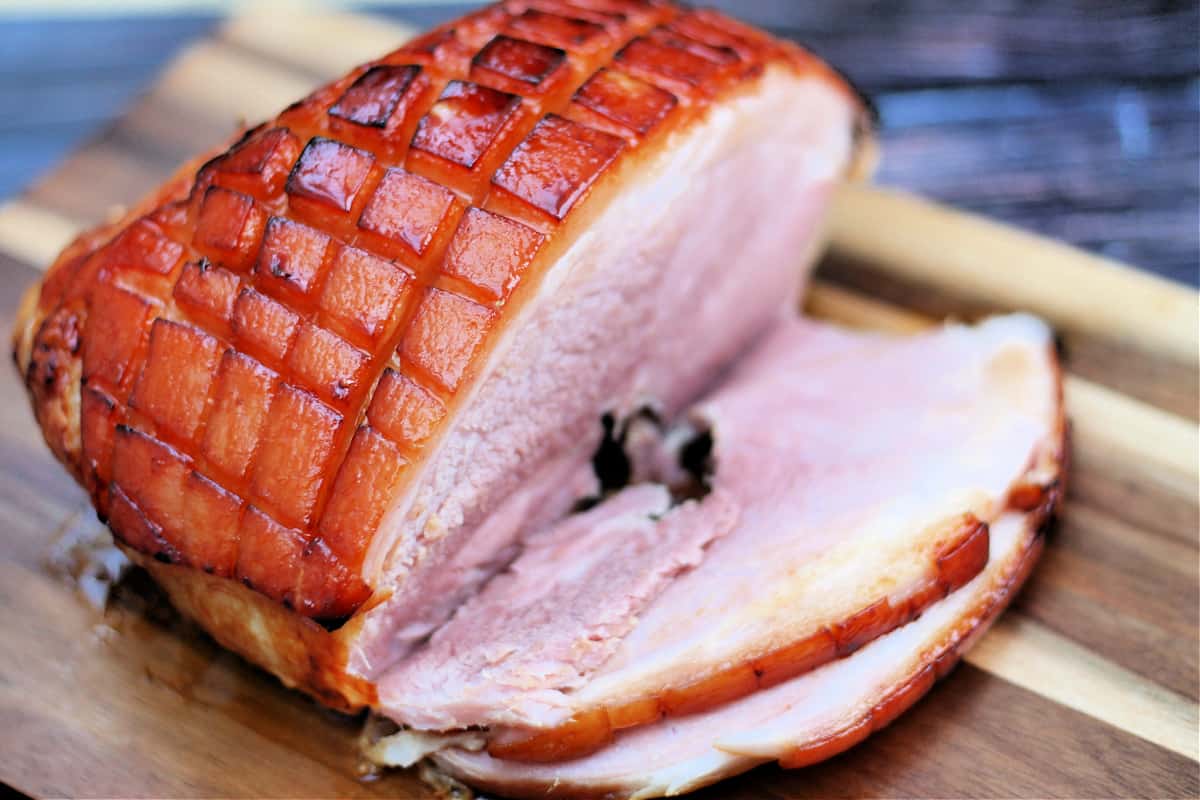 If you are not from the UK where gammon is a common cut of meat, then gammon is an uncooked piece of pork hind leg, cured like bacon, which in Britain we buy uncooked from the supermarket, either as smoked or unsmoked gammon.

Gammon is a typical basis for a roast dinner as well as being enjoyed at Christmas often on Boxing Day.

Gammon as a word is related to the Spanish jámon or French jambon (ham), so often in the UK too we call this a ham, or Christmas ham.

We cook it either in the slow cooker or by baking in the oven to make ham. So gammon could be called a fresh ham, as you need to cook it before eating it, as it is raw.

In the USA where you cannot normally buy gammon in stores, you could achieve similar results by baking a ham joint.

It may be quite similar to an uncooked city ham or ‘smoked ham, shank portion’ you would buy in the USA for example.

It is typical to soak or boil gammon before cooking to remove some of the salt. I find that choosing unsmoked usually makes this not necessary. 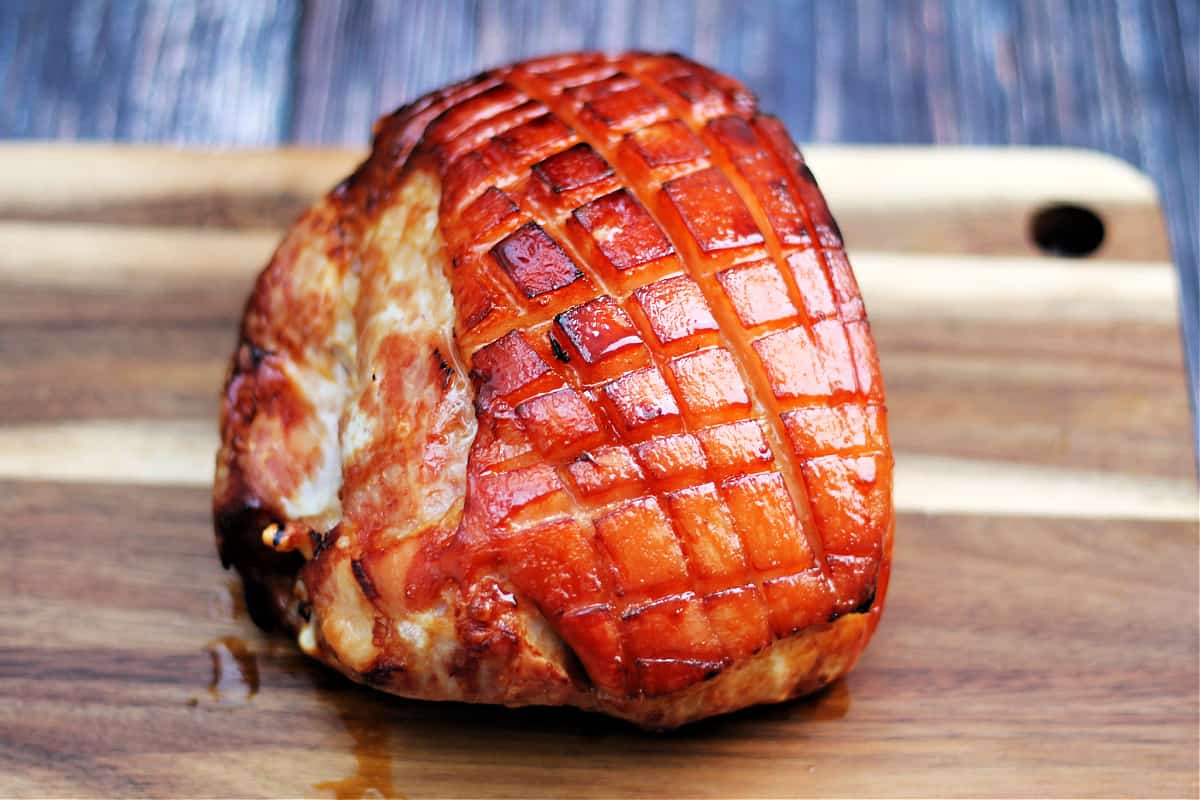 No slaving over a hot oven for hours or checking water levels in a pan required here. Just put the gammon in your slow cooker with some apple juice or stock and off you go!

Over the holiday period you can simply pop the gammon in the crockpot and do something else, a spot of present wrapping, writing Christmas cards, visiting friends.

You can even cook this overnight if you are short on oven space for your festive dishes.

Just half an hour in a hot oven at the end and you will have a golden gammon joint which is so tender inside from slow cooking in apple juice. It will be perfect as your Christmas or Boxing Day ham for your Christmas buffets! 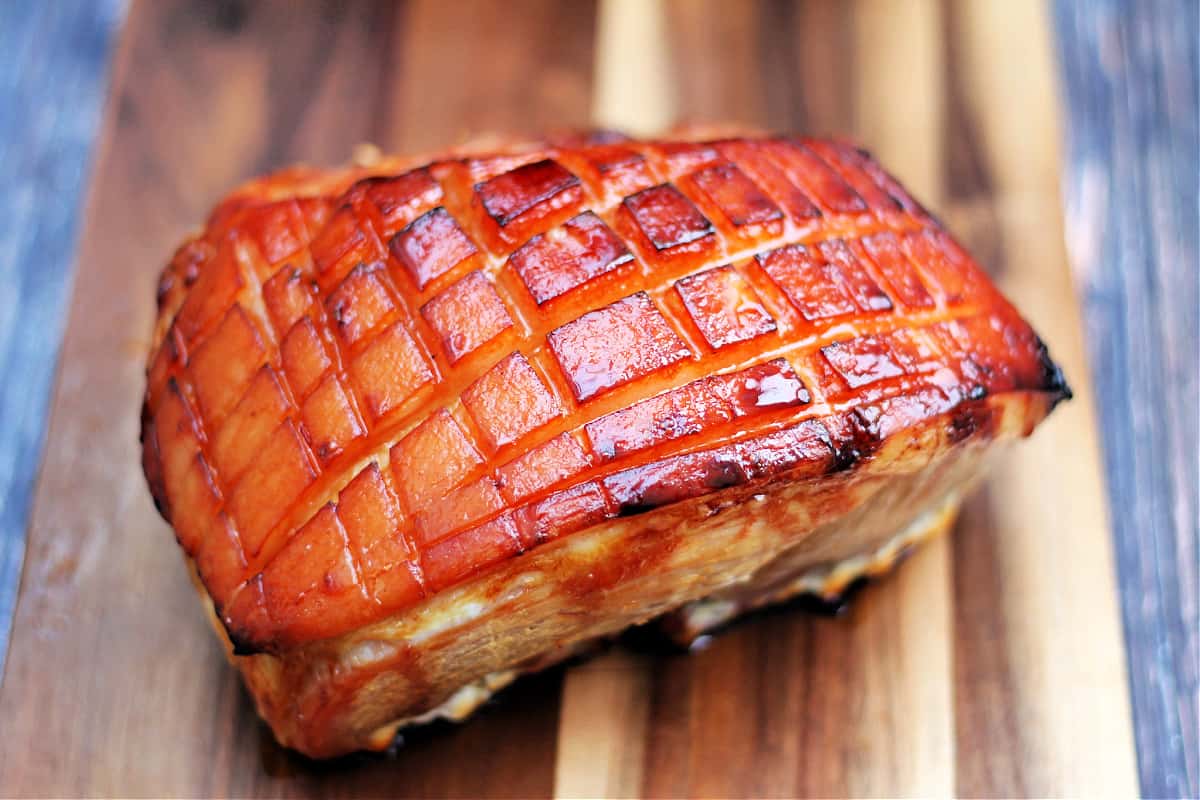 1. Put your gammon joint in your slow cooker with 200 ml apple juice and cook for 5 hours on high or 8 on low – based on a 2 kg joint. Check out the cooking times for different weights below. 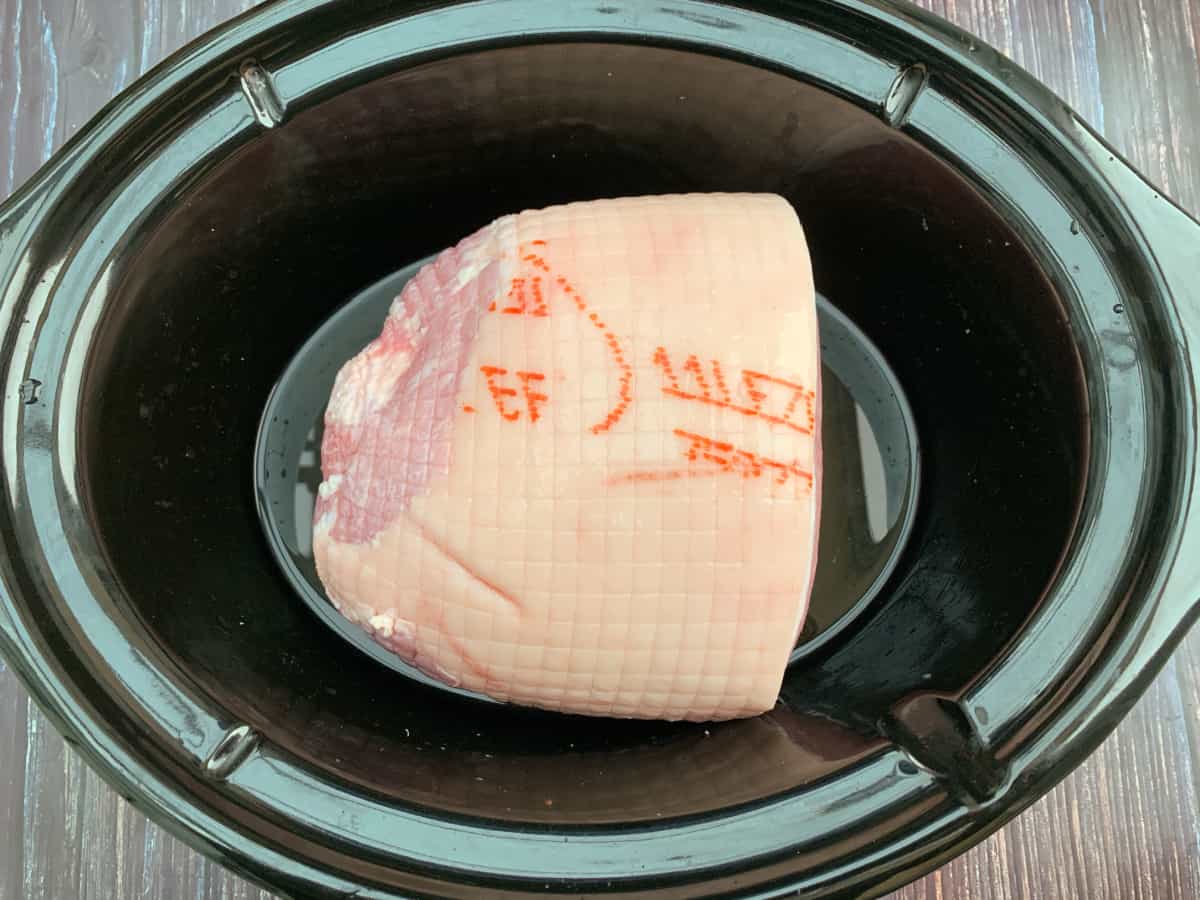 2. After cooking, check the joint is fully cooked either using a food thermometer or by checking it is tender in the centre with a knife and the juices run clear. Preheat your oven to 200 degrees C (fan). 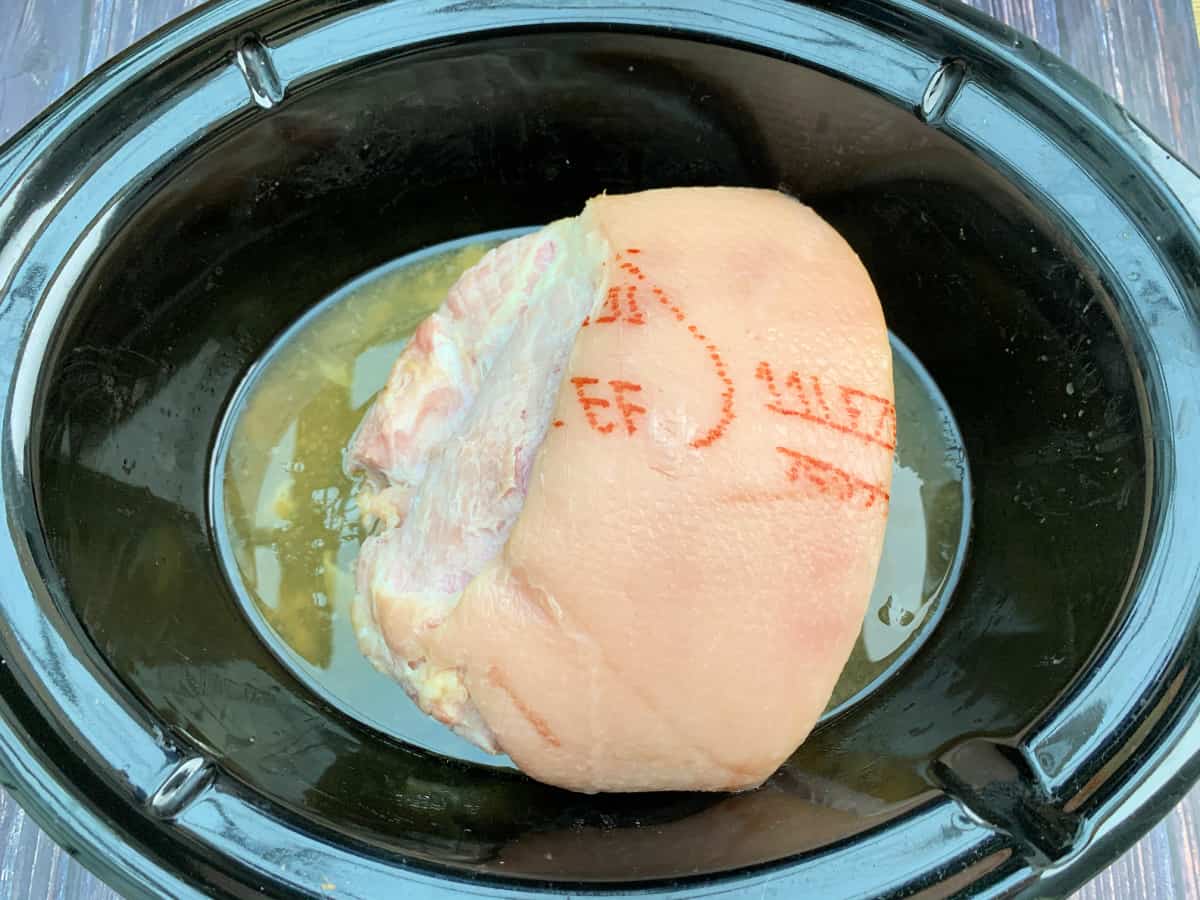 3. Transfer the gammon to a roasting pan, remove the string if it is covered in string, and using a sharp knife, score the fat in a diamond pattern. 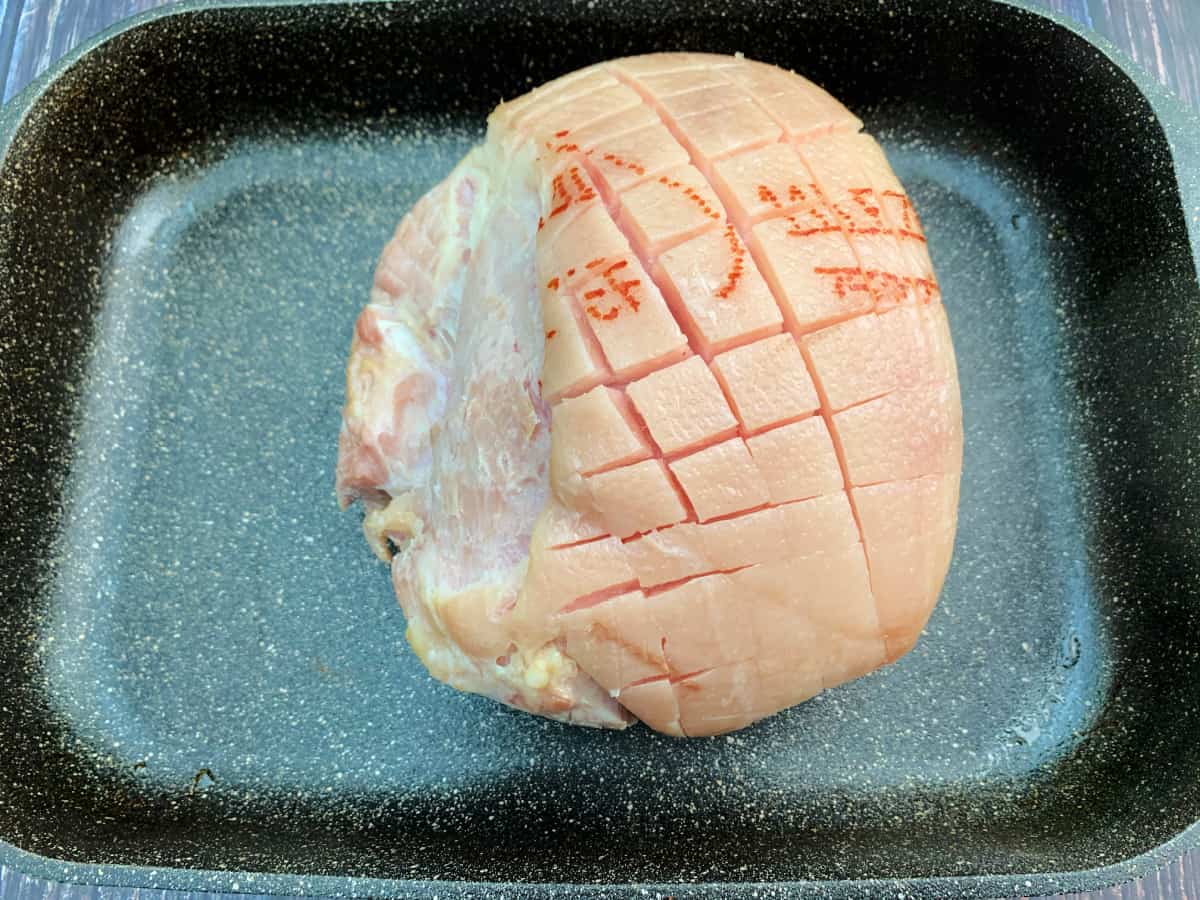 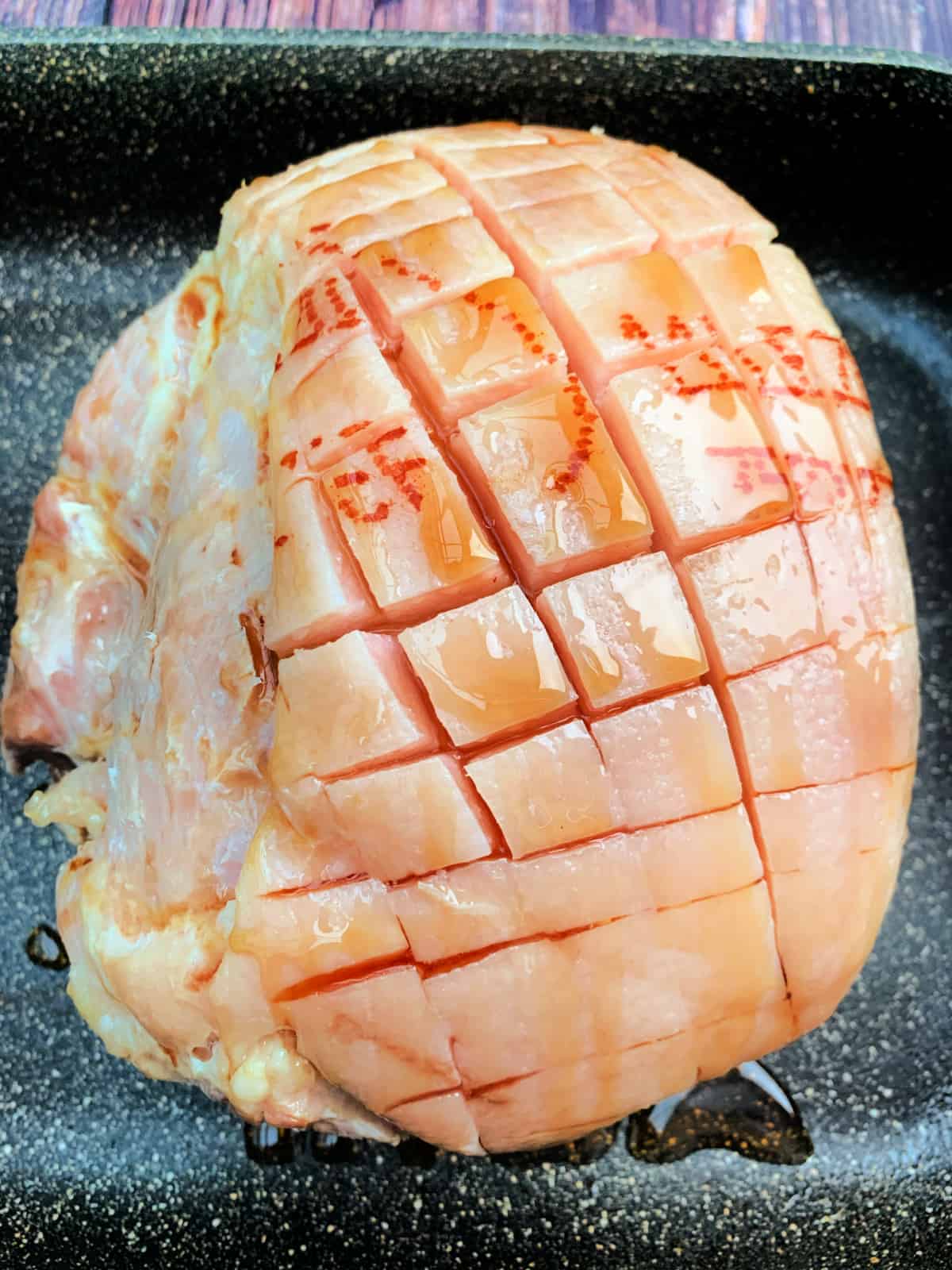 5. Roast in the oven for 20-30 minutes until golden. Half way through the cooking time, baste the joint with the juices from the base of the tray, it works really well if you use a pastry brush to make sure the maple syrup coats the fat fully. Once cooked, transfer to a board ready to serve. Allow to rest for ten minutes before carving. 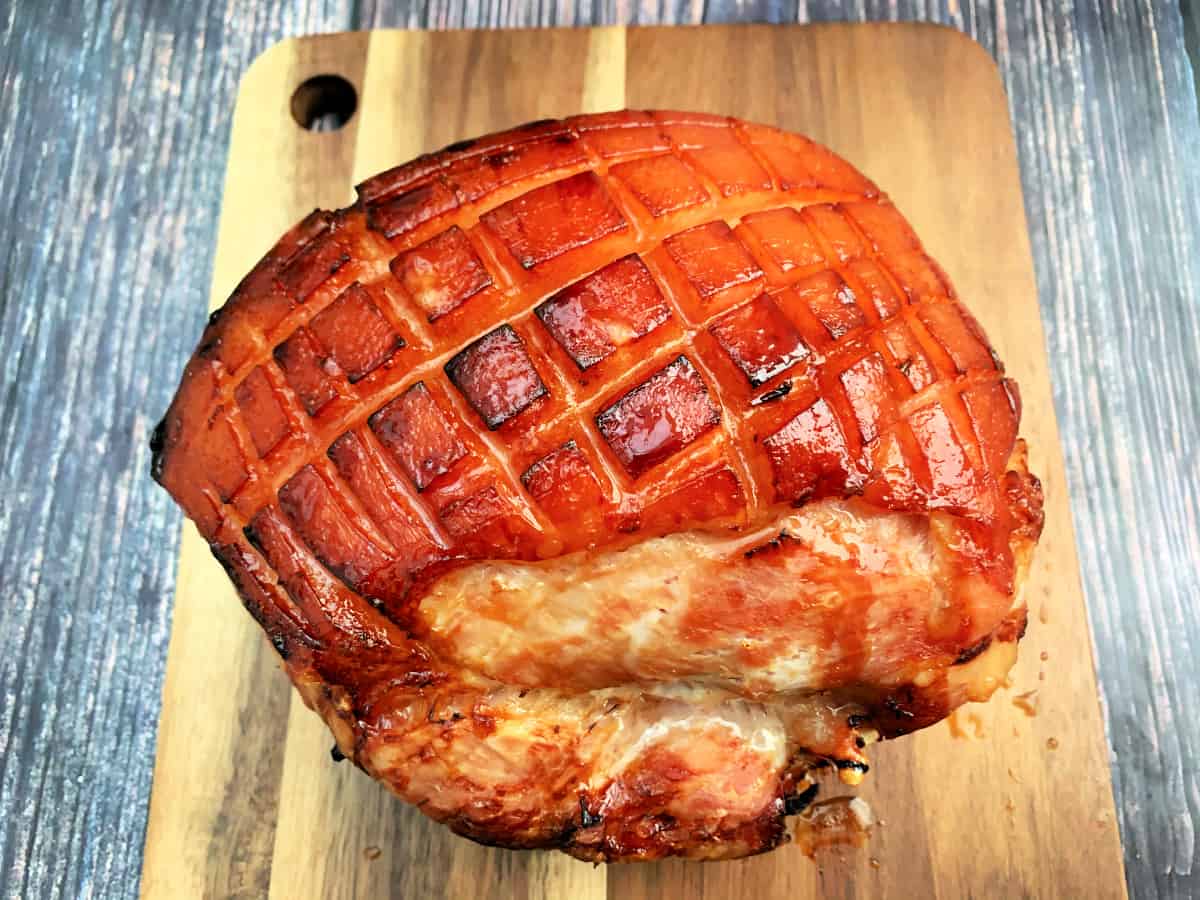 For a 2 kg joint of gammon:

Checking your gammon is cooked

Use a food thermometer to check the internal temperature of the meat at the deepest point has reached 71 degrees C.

Check the meat is tender, has a cooked texture, no red remains (gammon will often look pink) and slices easily.

If you don’t have maple syrup then you could also drizzle honey over your ham before cooking in the oven, it works just as well. Runny honey is best. 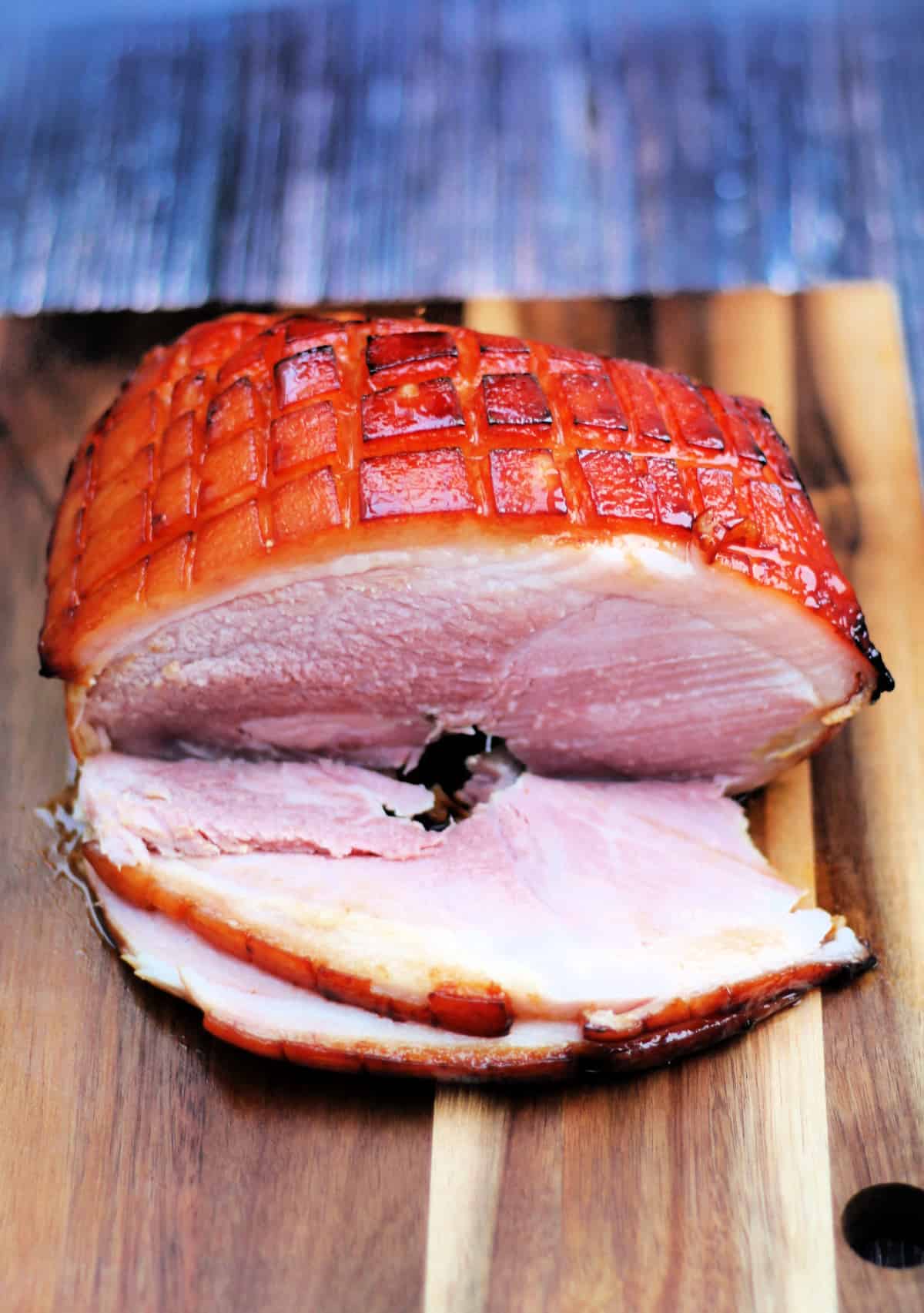 If you are looking for Christmas recipes for your slow cooker you are in the right place!

Make sure you also check out my Christmas slow cooker roundup full of edible gifts, sweet treats, Christmas dinner recipes and more, all made in your slow cooker!

For some more delicious roast ideas, take a look at these from fellow food bloggers:

For all of my slow cooker roast recipes make sure you take a look at my guide to making a roast dinner in your slow cooker. 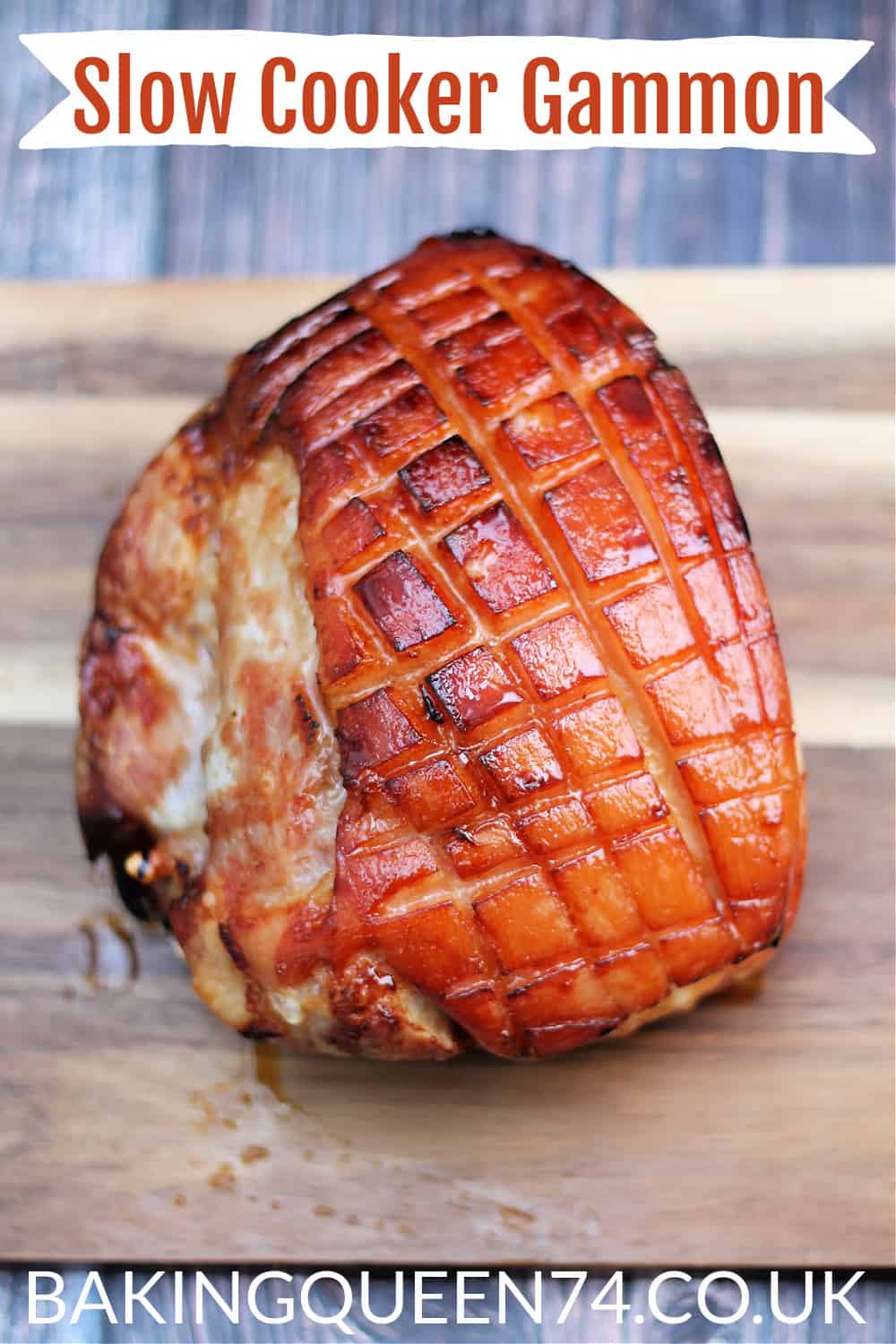 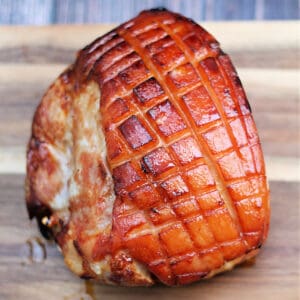