Tasty slow cooker pastitsio – so easy to make and perfect for the family to enjoy. This Greek-inspired dish with lamb in a spiced sauce and pasta topped with béchamel sauce is full of flavour. 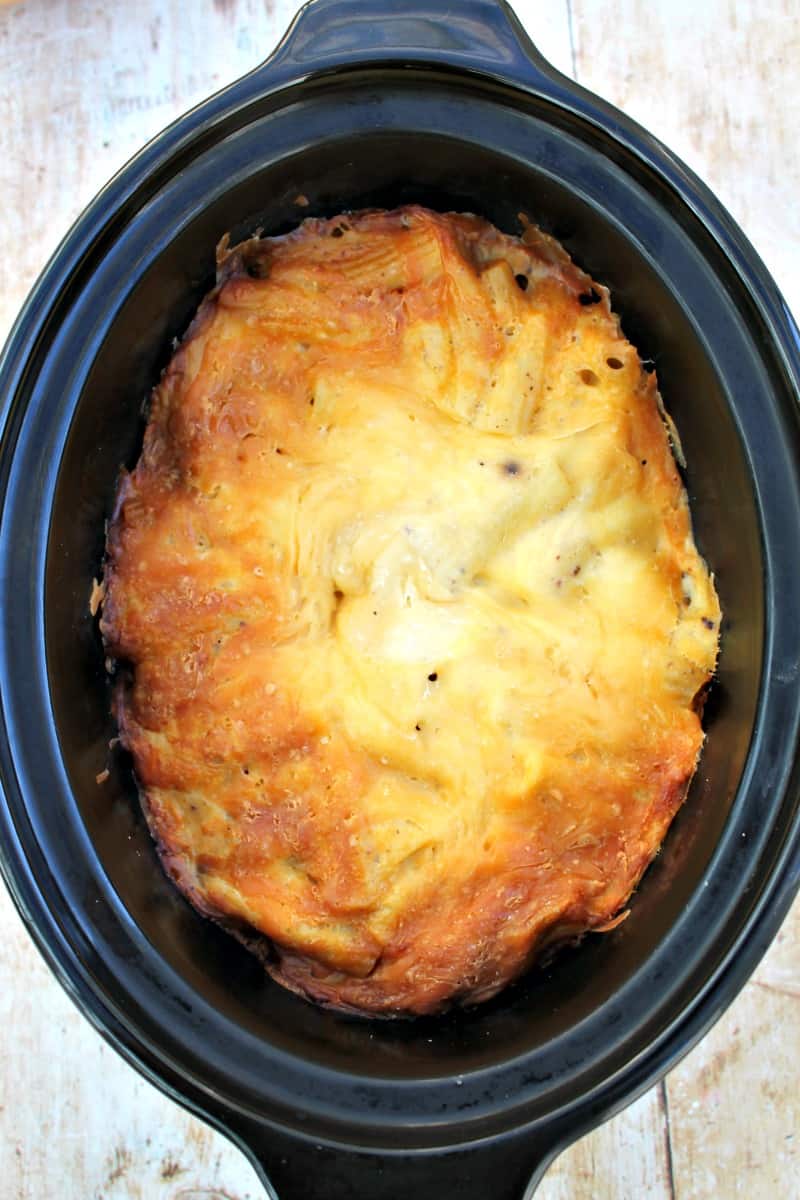 If you read my blog regularly you’ll know I’m always on the lookout for tasty meals to make for my family in the slow cooker. It’s the convenience of being able to do the cooking preparation earlier in the day so you don’t have to do it after a long day when everyone is tired and hungry.

Slow cooker lasagne remains one of our favourite recipes as it is so simple to make and you can include lots of vegetables to make it healthier and to make the meat go further. This dish uses some of the elements of lasagne so it’s a great option for families as it will be a familiar dish.

This delicious slow cooker pastitsio combines lamb mince and red pepper in a tomato sauce spiced with a touch of cinnamon with those perennial favourites pasta tubes, béchamel sauce and grated cheese.

Quick to prepare and then leave to cook in the slow cooker, you’ll definitely want seconds.

This makes a deep layered dish which can easily serve 6 people. Made in a 5.7 litre slow cooker. 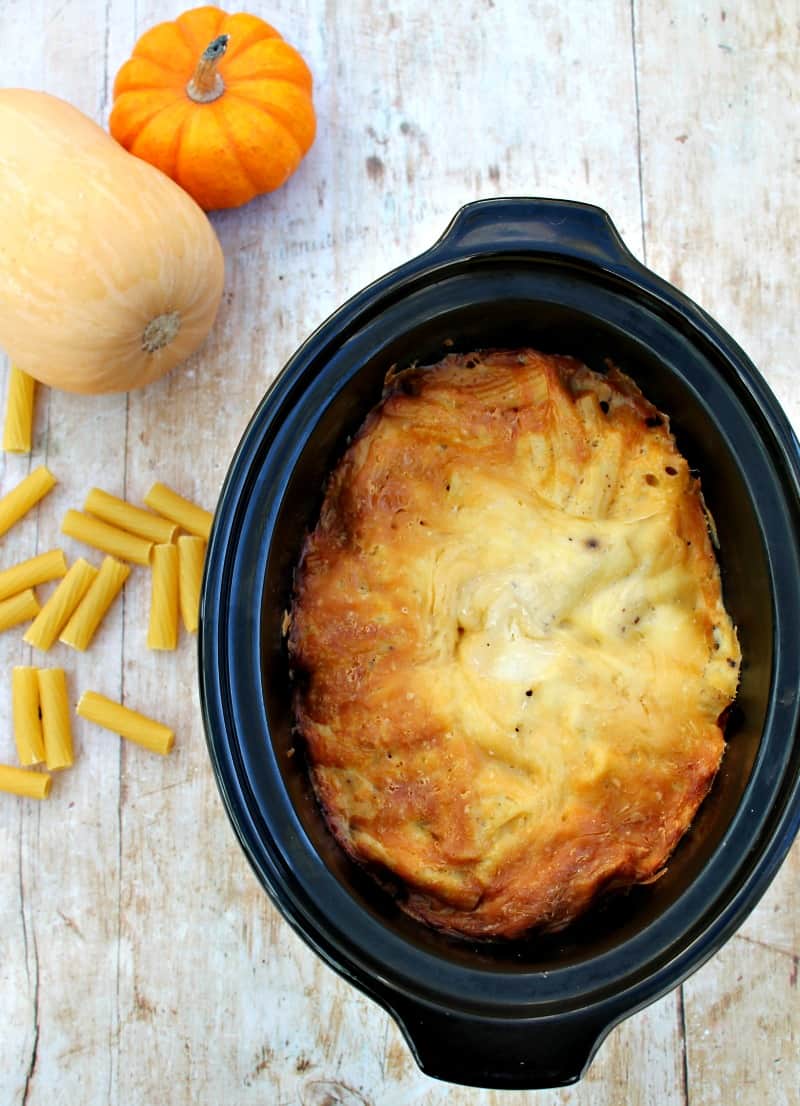 Pastitsio is a typical Greek dish similar to lasagne with layers of minced (ground) meat in a sauce spiced with cinnamon or nutmeg, tube pasta and béchamel sauce. It often uses lamb but can also be made with beef too.

There are variations on pastitsio which are made in Greece, Cyprus. Egypt and Malta, all with regional differences such as the kind of meat and cheese used but the overall idea is the same. This recipe is in the Greek style.

It is bound to be far from authentic as I am not Greek but this is my take on the dish, adapted to be made in the slow cooker! 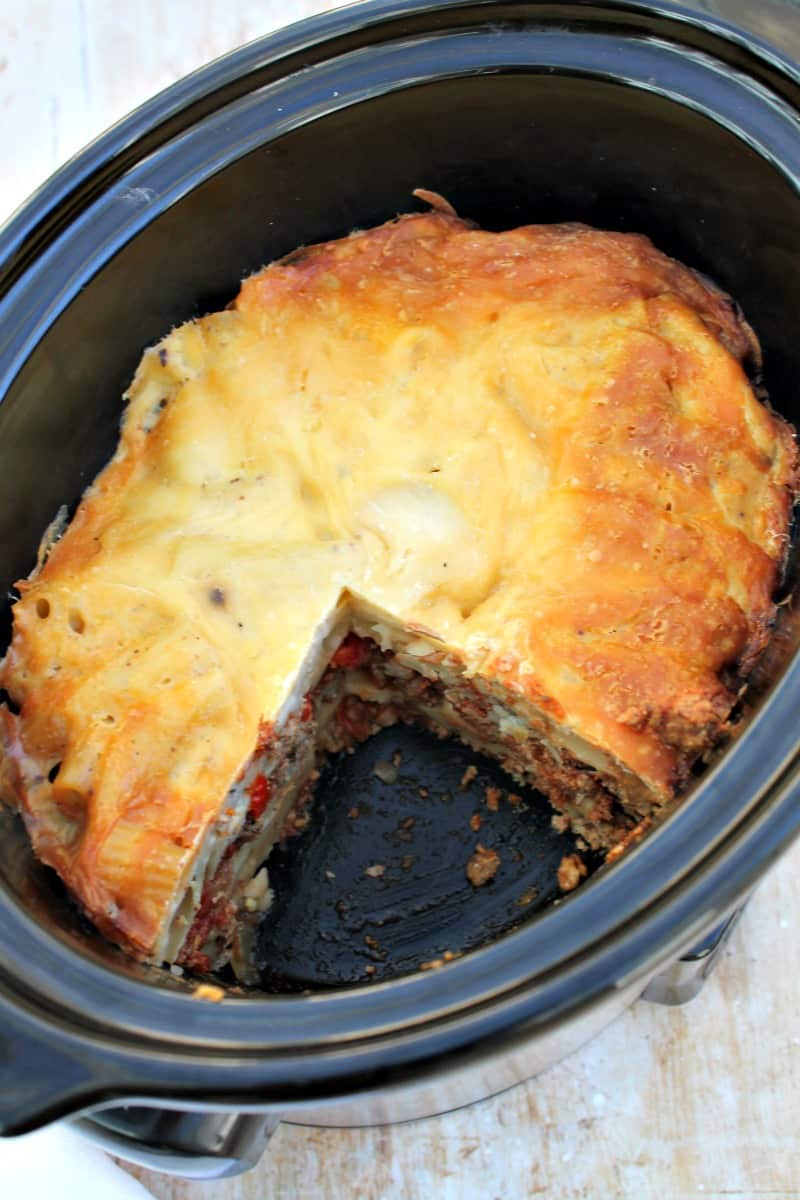 To make this recipe, you will need the following: 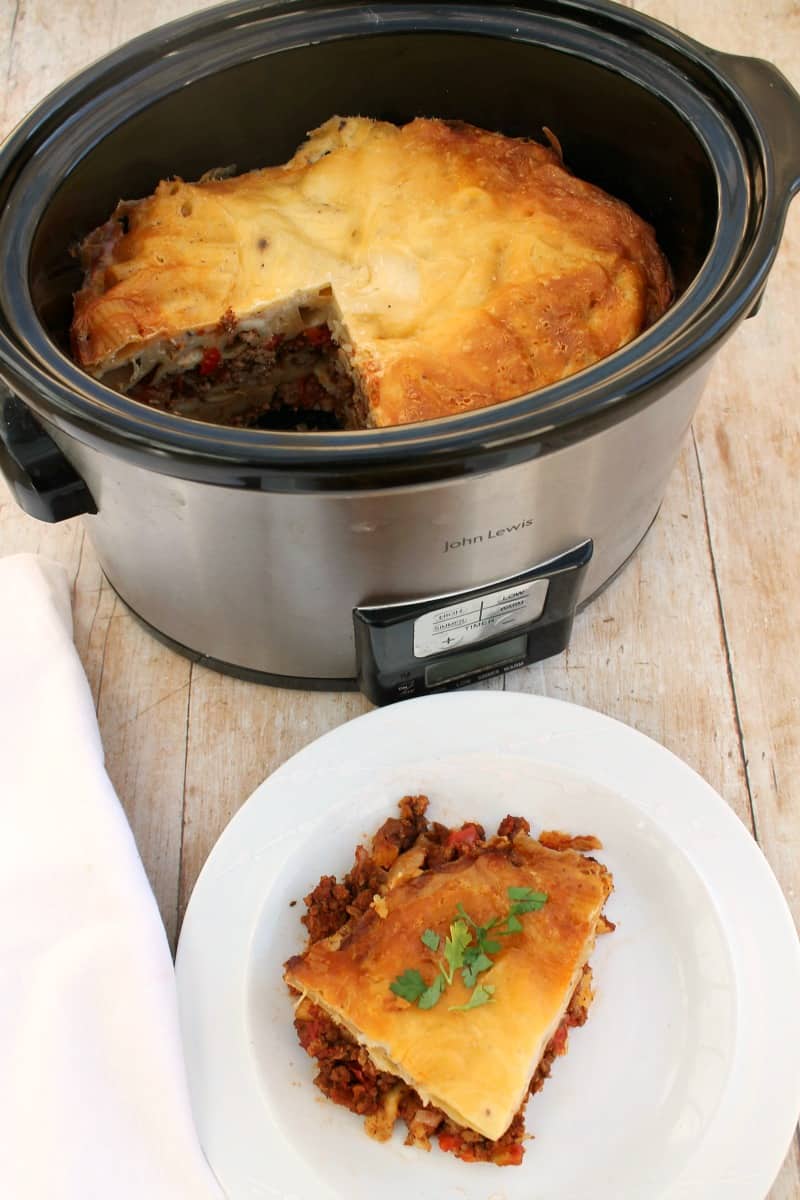 Step 1. Fry the lamb mince in the oil in a pan or wok, then add the chopped onion, red pepper, tinned tomatoes, cinnamon, oregano, garlic puree, tomato puree and mix well. Season with salt and pepper.

This meat layer ensures the first layer of pasta will cook through in the sauce. If the pasta was directly in the bottom of the slow cooker it would stick and probably stay hard. 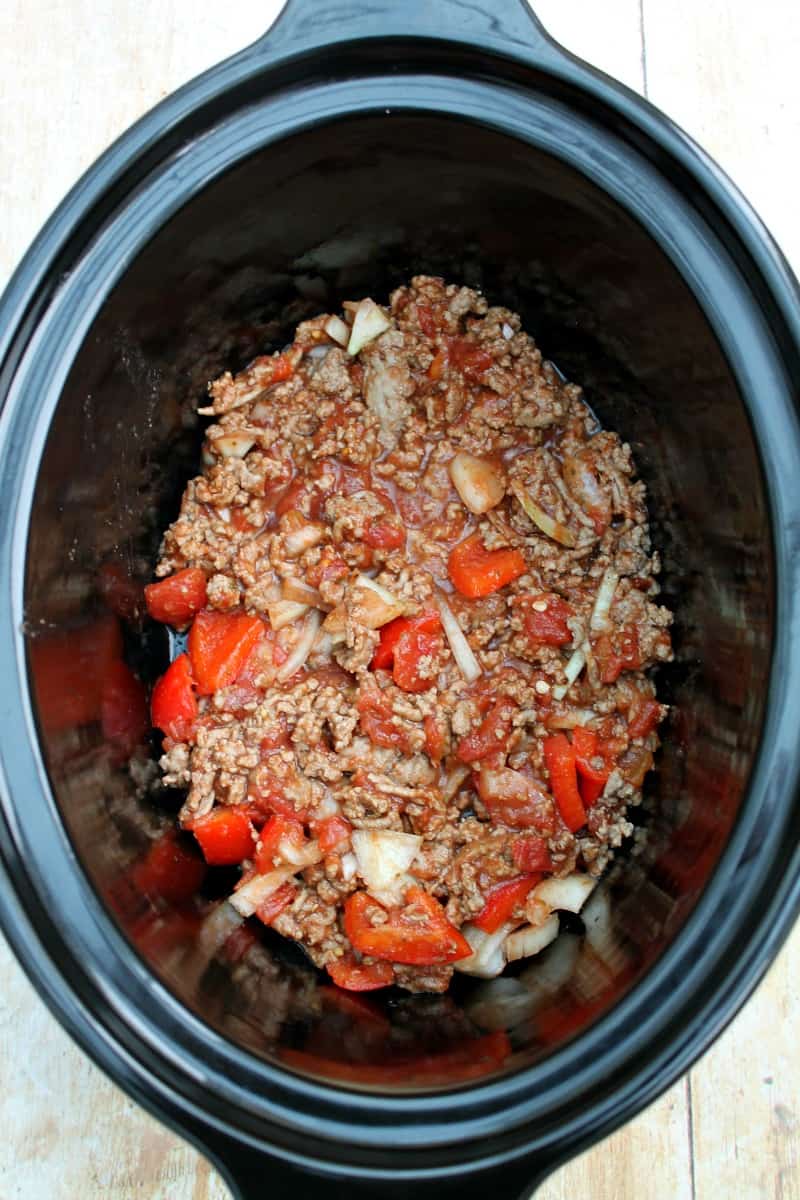 Step 2. Top the meat sauce with half the pasta tubes – I used rigatoni here. 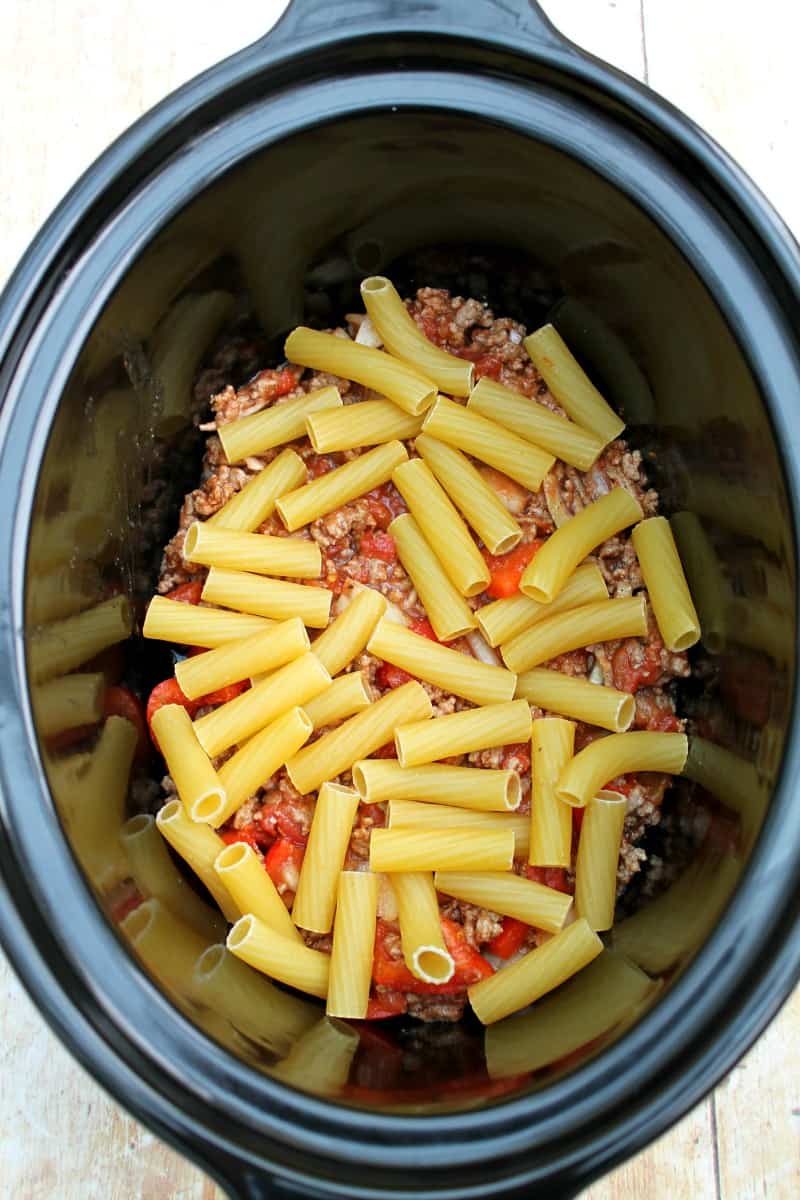 Step 3. Add the rest of the meat sauce on top of the pasta. 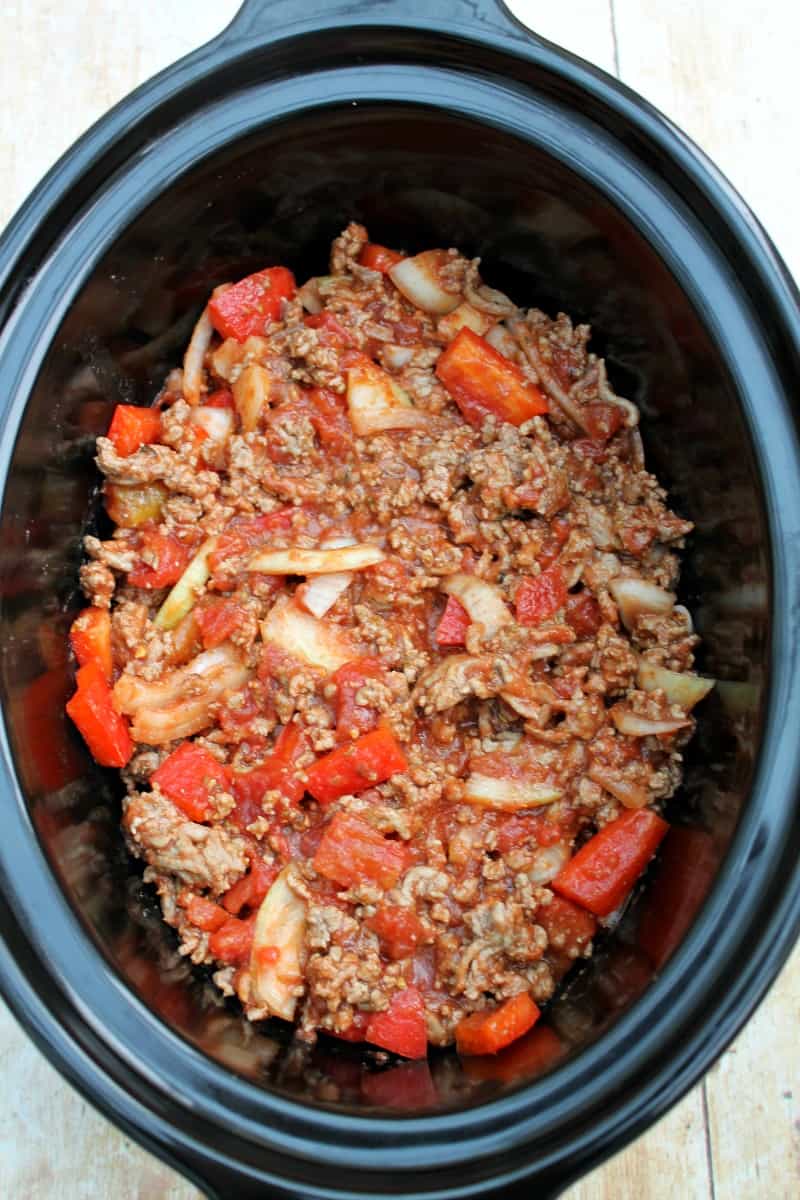 Step 4. Add the rest of the pasta on top of the meat sauce. 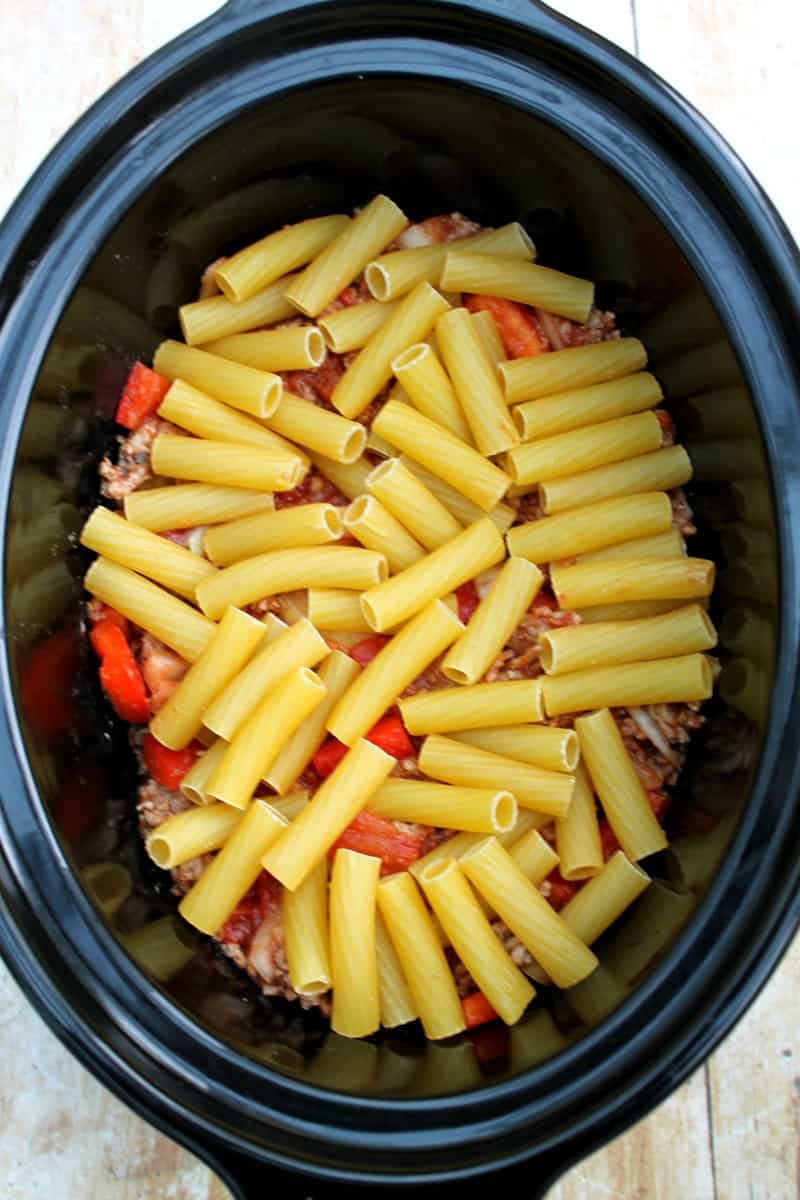 Step 5. Make the béchamel sauce in a small saucepan (melt the butter, add the flour, cook for 1-2 minutes, then add the milk little by little, whisking very well) and bring to the boil and simmer for ten minutes until very thick. Add the ground nutmeg and salt and pepper to season the sauce.

Step 6. Pour the béchamel sauce over the pasta, ensuring it is all covered evenly. 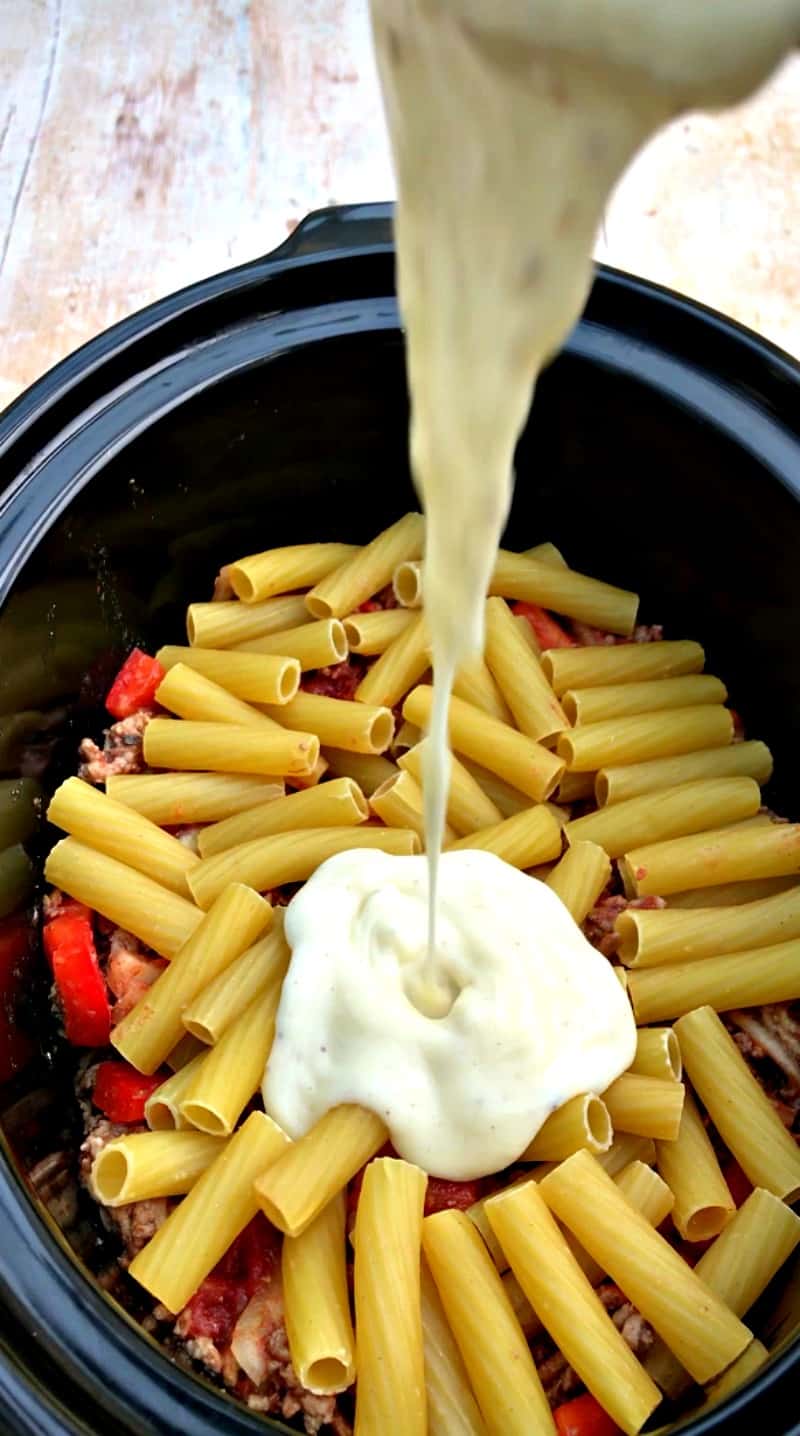 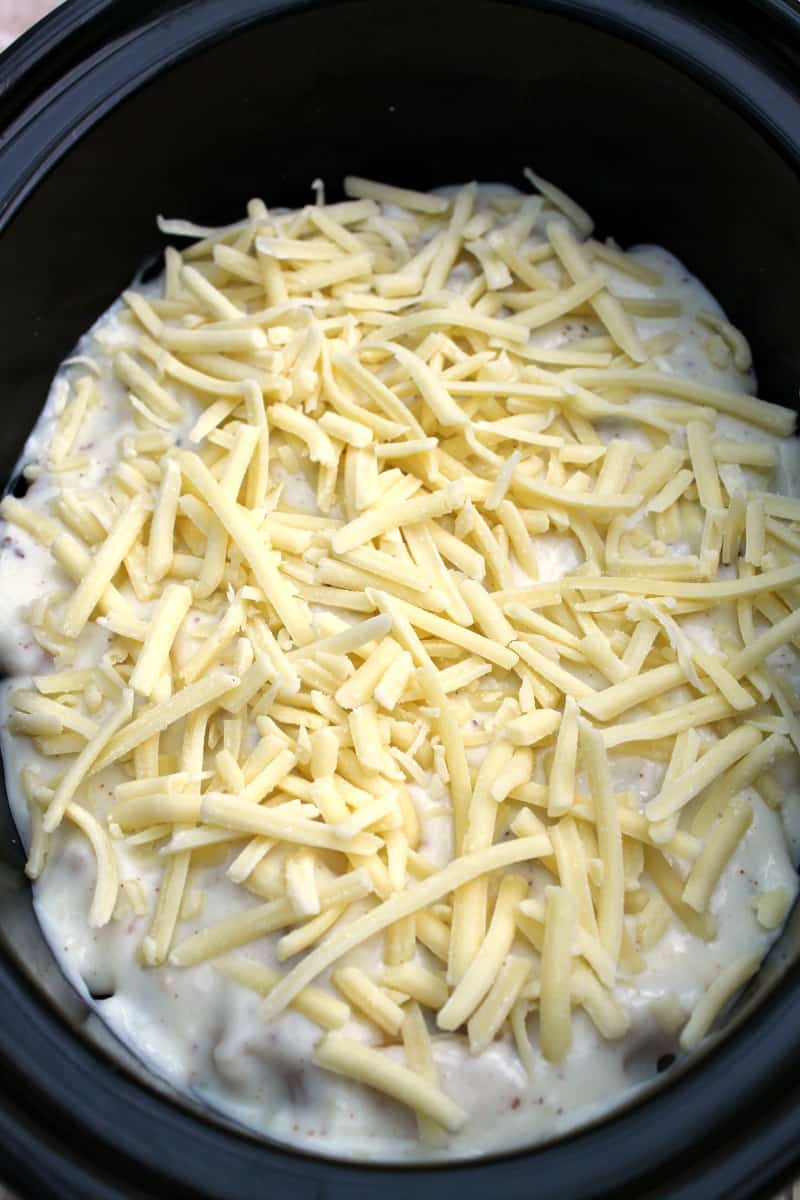 Step 9. Slice with a serrated knife through all the layers, and use a large spatula to remove portions from the slow cooker pot. Serve with green vegetables on the side.

Tip: To get cleaner slices to come out of the slow cooker pot, allow the pastitsio to stand for at least half an hour before serving if you can. Then it won’t fall apart quite as much as it can do. 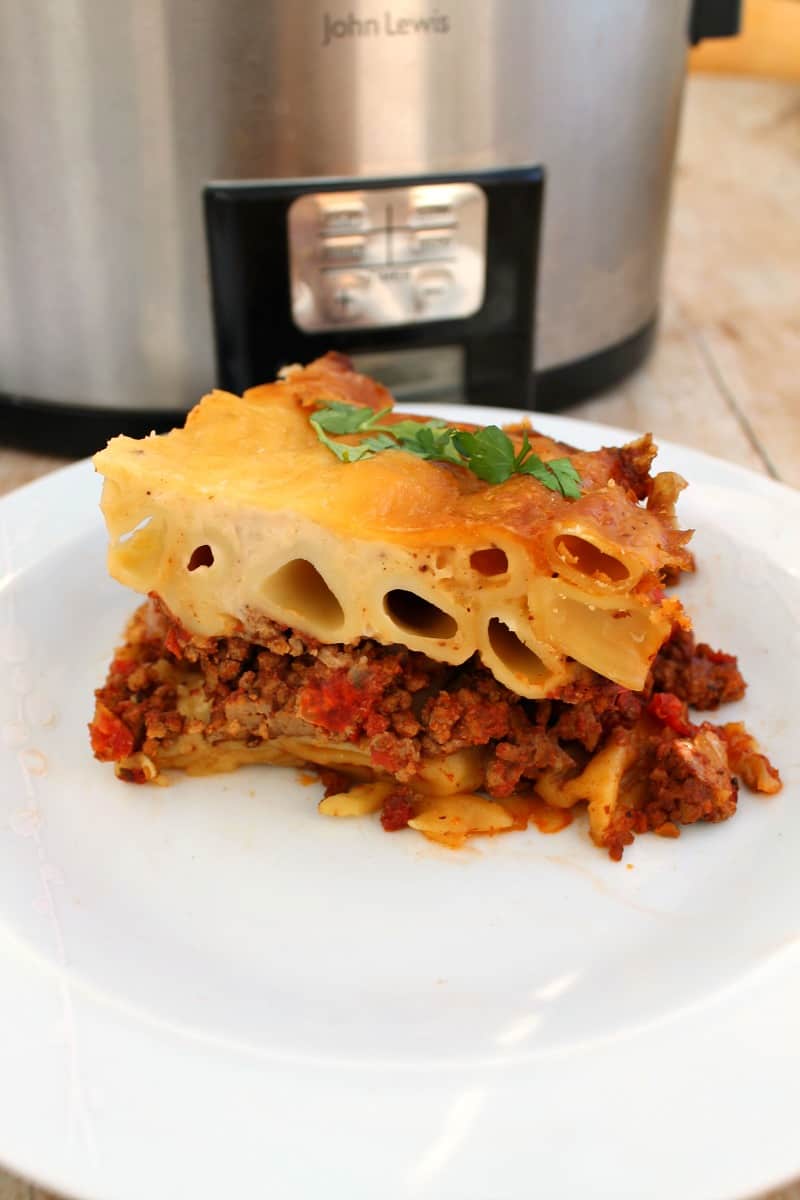 Other lamb-based dishes you might want to try if you love lamb are slow cooker moussaka and slow cooker lamb casserole. 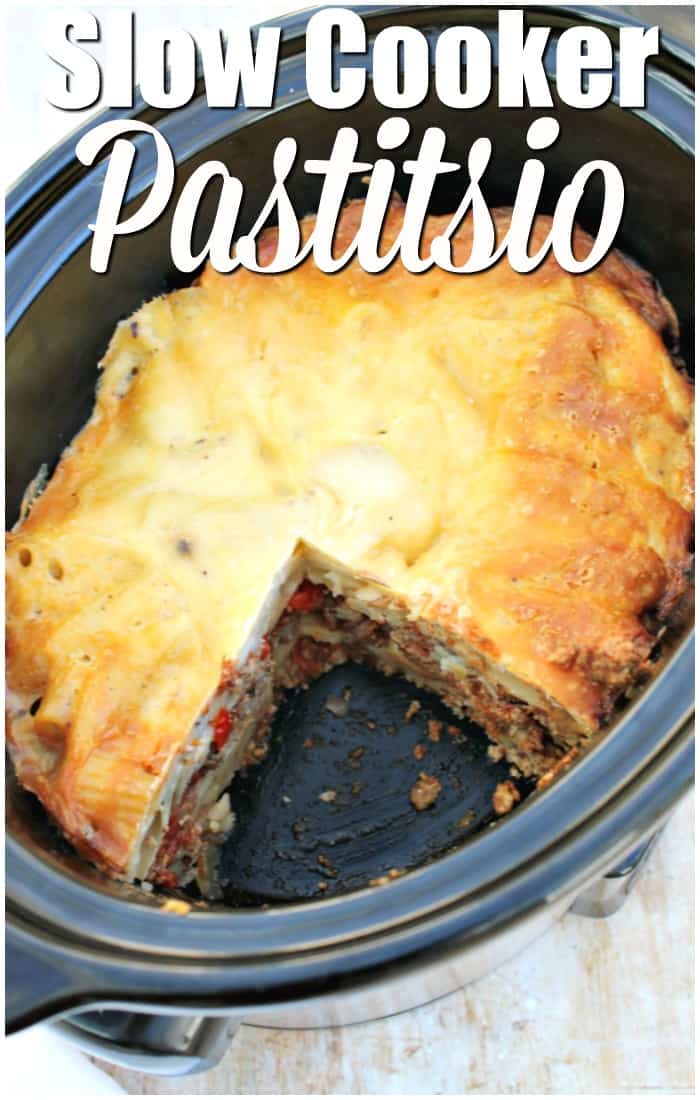 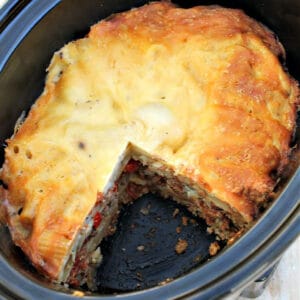 For the béchamel sauce:

I made this recipe in a 5.7 litre slow cooker.
Did you try and love this recipe?Then please leave a review and rating in the comments at the bottom of the post. If you post your creation on Instagram, tag me @bakingqueen74 or use hashtag #bakingqueen74!
« Slow Cooker Pumpkin Banana Bread
Slow Cooker Turkey Crown »