Slow cooker panettone bread and butter pudding (or panettone French toast casserole for my readers in the USA) is a delicious festive dessert ideal for using up that leftover panettone from Christmas. 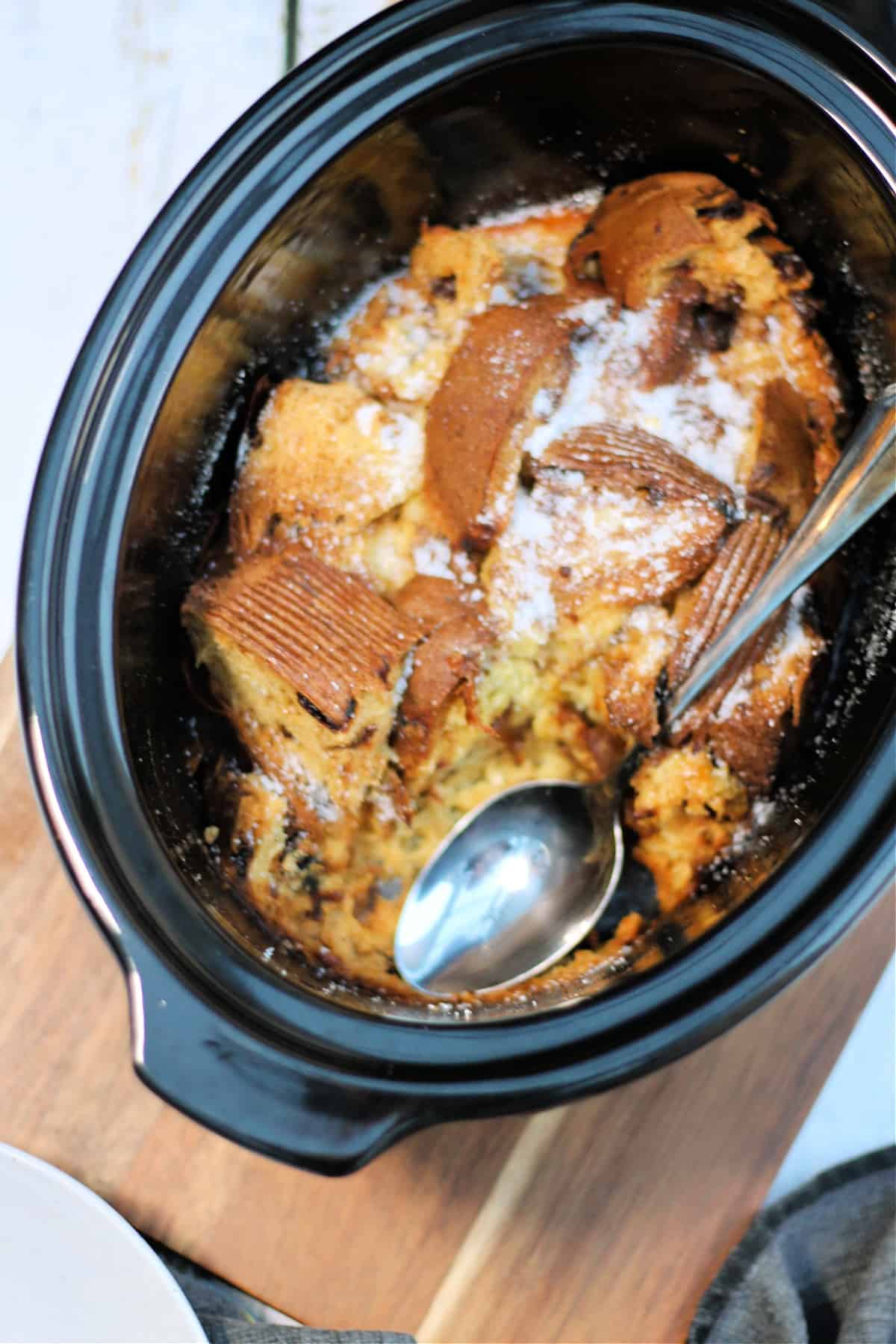 Full of festive flavours, the light spices intensify the flavour of the panettone. I love mine sprinkled with a little sugar before serving for some added crunch!

I had some leftover panettone that needed to be used up (just a cheap supermarket one) and made a bread and butter pudding with it, with a little cinnamon and ginger. I think Jamie Oliver made something similar in his latest series.

I make this in my slow cooker but it would equally work in a dish in the oven. The slow cooker is cheaper to run though so this was a frugal dessert in more ways than one!

Plus there is no need to worry about burning if you don’t keep your eye on the pot. It takes longer for slow cooker dishes to burn. 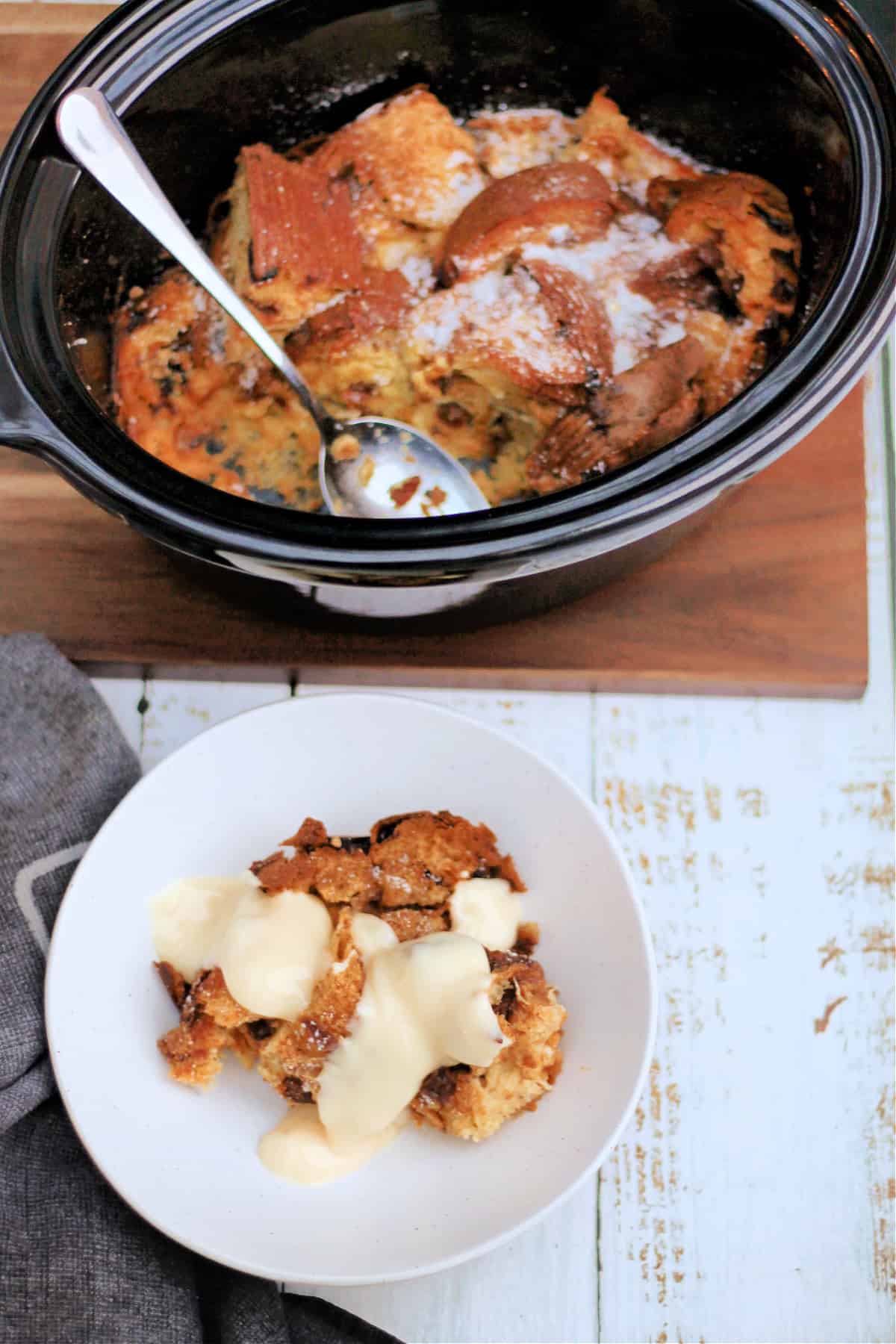 The panettone was only 99p as it was near its sell by date, I then kept it for another week and it was still perfect. Excellent after Christmas when you need to save the pennies.

If you have some panettone left after Christmas this easy dessert is a great way to use it up. It would even make an ideal slow cooker Christmas breakfast recipe!

This was so easy to put together, and the whole family found it tasty which is always good.

Panettone is an Italian yeasted bread with candied fruit and raisins. It is typically enjoyed over the Christmas period, and is now often given as a foodie gift in the UK at Christmas time. Panettone are baked in paper cylindrical moulds which give them their distinctive domed shape.

The flavour is reminiscent of British hot cross buns! 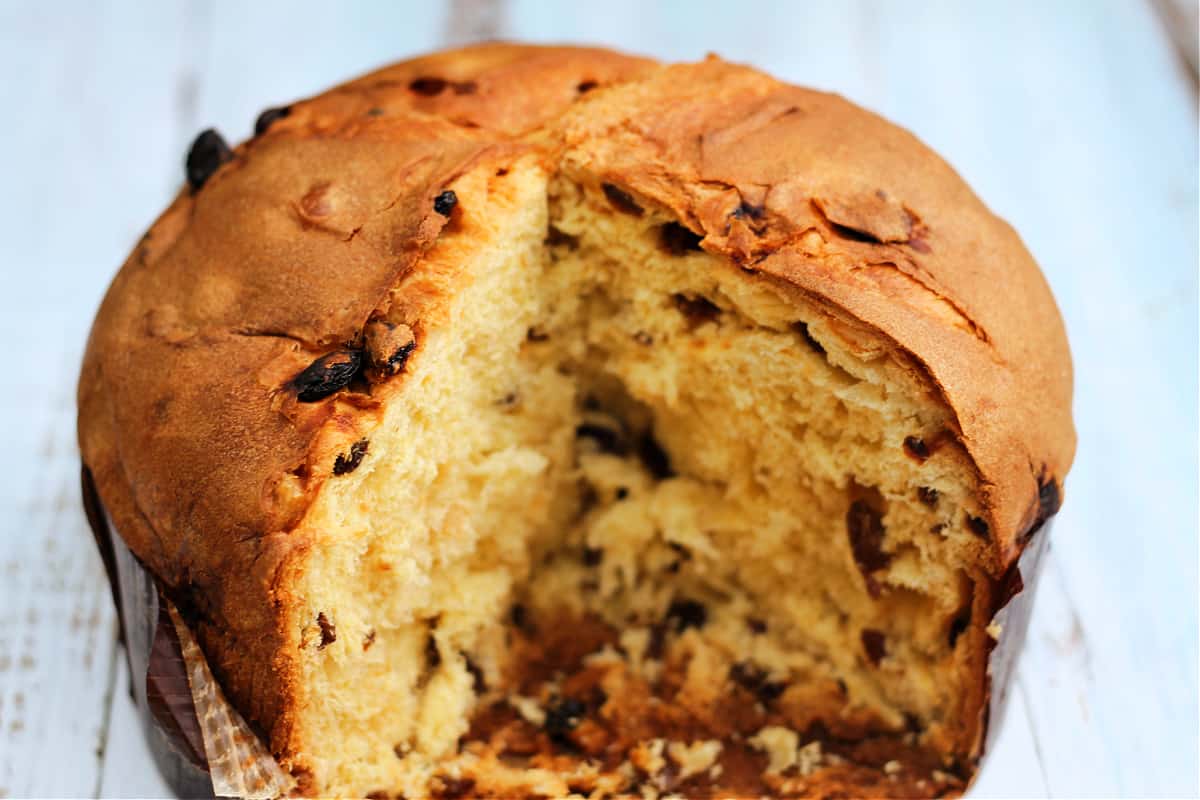 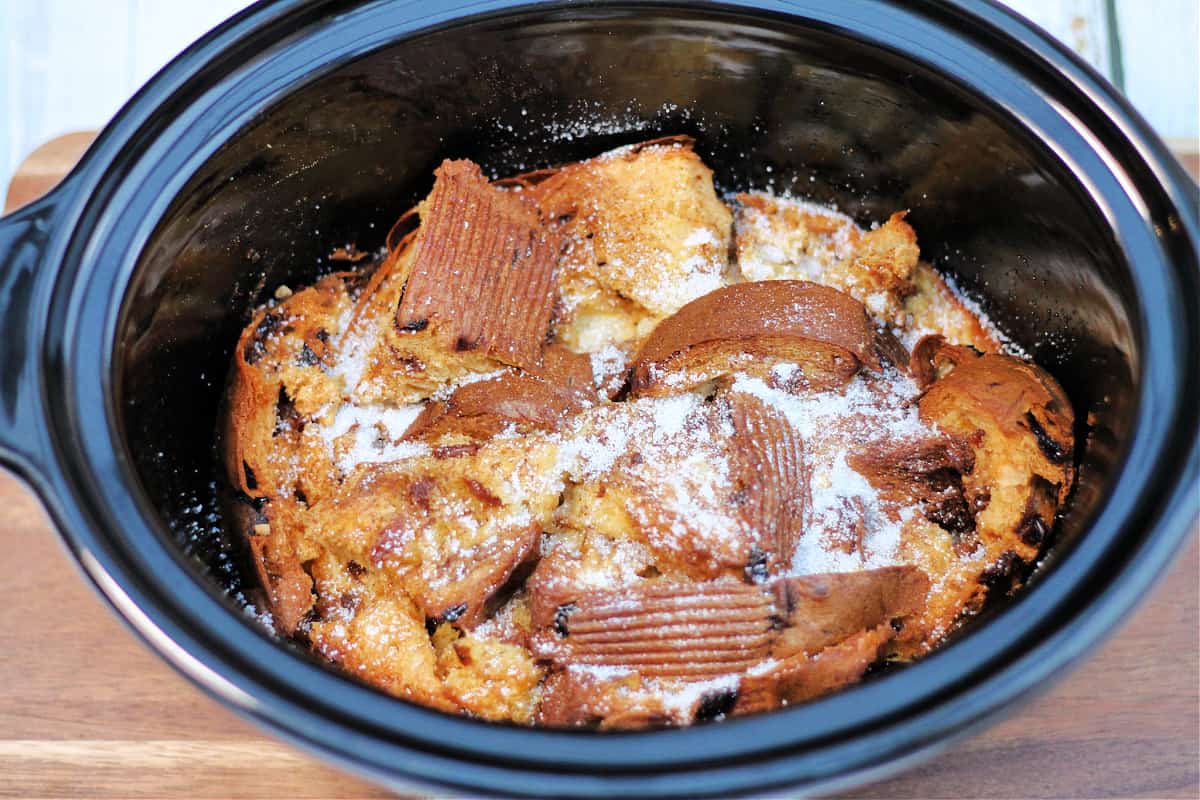 After baking in the slow cooker as you can see the custard will cook and become set during that time, as the edges of the panettone crisp up! No need to get an oven involved at all, just brilliant!

As an optional twist this dessert can also be made more luxurious by using cream for the custard but I think milk works just as well for an everyday pudding.

If you have leftover Baileys- or brandy-flavoured cream from Christmas then you could use that in your custard.

You could also add in chocolate chips, raisins or sultanas in between and on top of the layers. 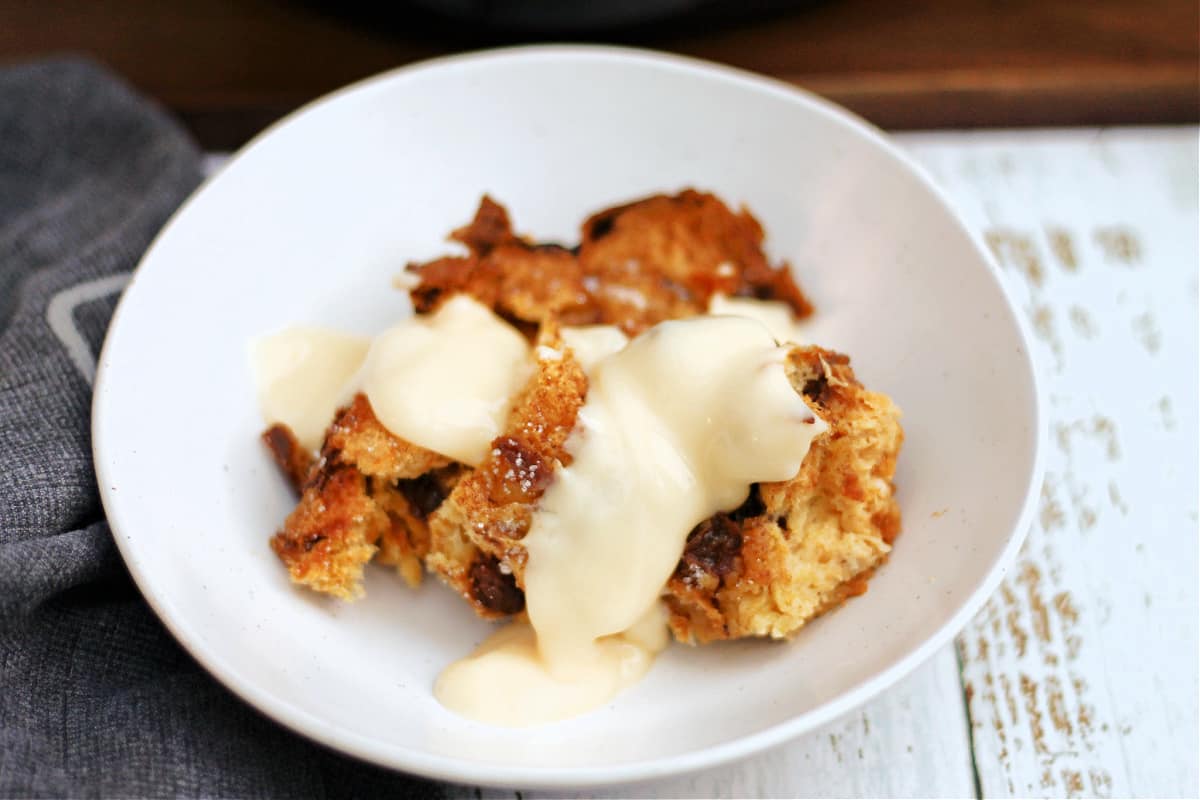 So if you need a festive and comforting dessert for a cold day, then slow cooker panettone bread and butter pudding might fit the bill perfectly!

It’s simple enough for everyday but also has those Christmassy flavours to indulge in. 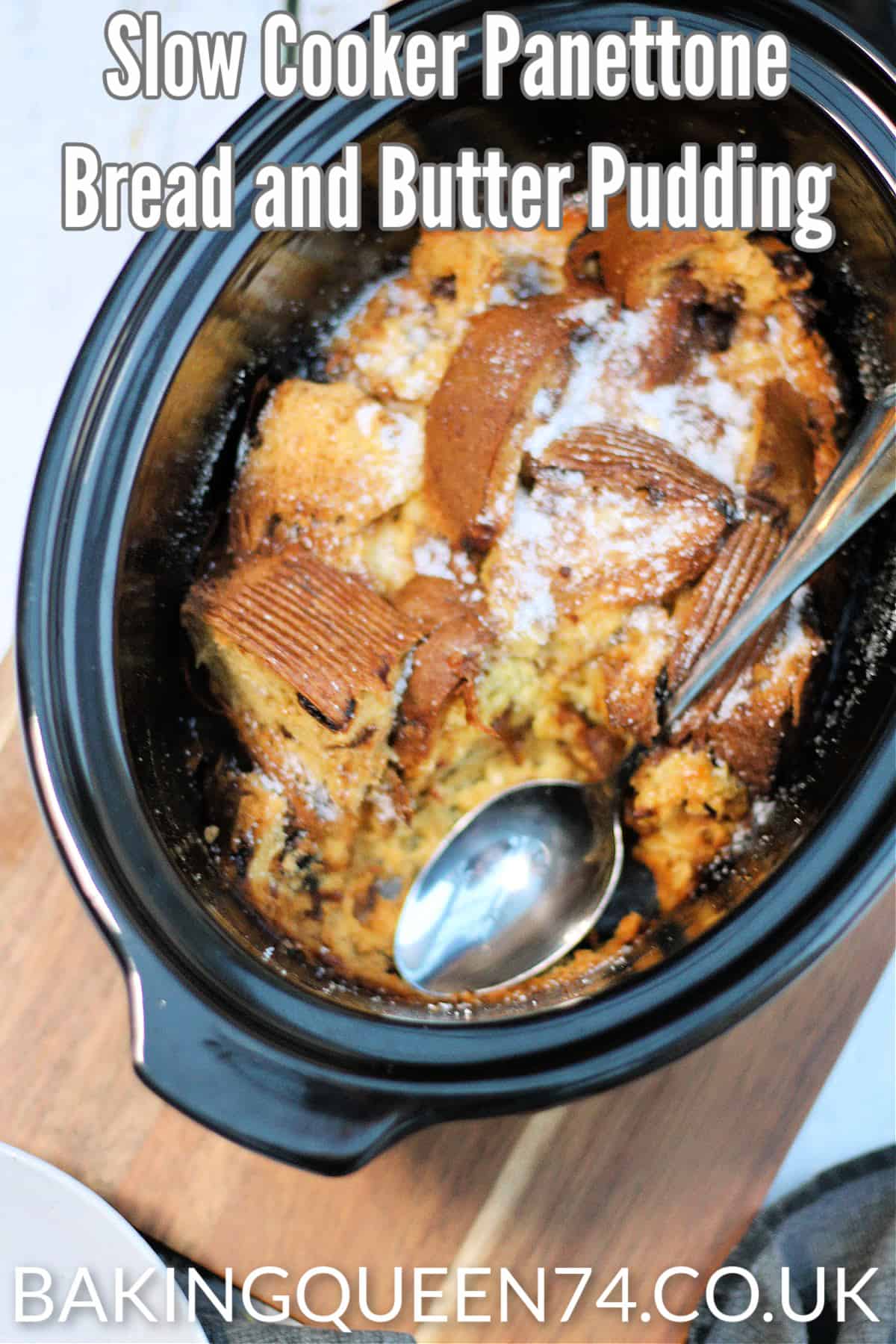 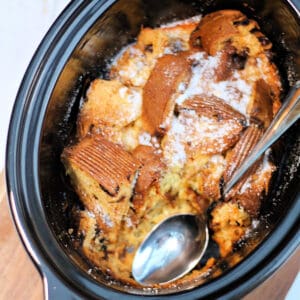 Slow cooker size: The slow cooker used for this recipe is a 3.5 litre oval slow cooker. If you have a larger slow cooker I would recommend doubling the ingredients so that your dish is deeper, to avoid burning.
Did you try and love this recipe?Then please leave a review and rating in the comments at the bottom of the post. If you post your creation on Instagram, tag me @bakingqueen74 or use hashtag #bakingqueen74!
« Merry Christmas
2014 Roundup »